'IAEA report on Iran will echo US concerns'

Israel expects the international community to impose "debilitating sanctions" on Iran following the findings presented by the IAEA in its new report on Tehran's nuclear efforts, Ynet learned Monday.

Defense establishment sources said that the reports will include "unequivocal proof of Iran's true intentions. This has great importance. Hopefully Russia and China will join the sanctions, despite their reluctance."

The United States, France and Britain are very concerned and "the more nations join the call for truly harsh sanctions against Iran, the more unyielding they will be," a senior source told Ynet.

"It has always been clear to Israel what the Iranian intensions are. Now the rest of the world will know it too." 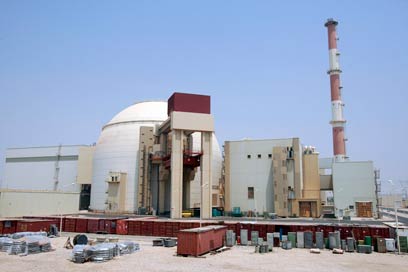 Israel hopes the report will offer more details on the Iranian nuclear program, including information as to its missiles array and the uranium enrichment program.

"Even if the UN Security Council will find it hard to issue dramatic sanctions, Iran could still suffer from financial sanctions – it has financial interests which are vulnerable," a Jerusalem source said.

Earlier, the White House said that it expects the pending IAEA report on Tehran's nuclear capabilities to echo US concerns over Iran's behavior and its failure to lmeet its international obligations.

Still, White House Spokesman Jay Carney would not address the specific findings of an International Atomic Energy Agency report expected to be released in the coming week.

Diplomats have told AP that the IAEA's new intelligence suggests Iran has created computer models of a nuclear warhead, as well as other previously undisclosed details on alleged secret work by Tehran on nuclear arms.

Meanwhile, Germany's Foreign Minister Guido Westerwelle said that the debate about a military strike against Iran is "dangerous" and "strengthens the leadership of the Islamic Republic rather than weakening it."

Israeli media have been rife with speculation that Prime Minister Benjamin Netanyahu is working to secure cabinet consensus for an attack on Iranian nuclear installations.

"I warn against floating the idea of military options," Westerwelle told Hamburger Abendblatt. "These are debates...that strengthen the Iranian leadership rather than weaken it."

The UN nuclear watchdog, the IAEA, is expected this week to issue its most detailed report yet on research in Iran seen as geared to developing atomic bombs. But the Security Council is not expected impose stiffer sanctions as a result. Westerwelle said, however, that if Iran was not cooperating, the "international community will not simply return to business as usual".

"Iran has the right to use nuclear energy for civil purposes but also the duty to exclude a military use," he said.