China called on Wednesday for a peaceful resolution of the Iran nuclear issue after the International Atomic Energy Agency concluded Tehran appears to have conducted work on designing an atomic weapon.

Meanwhile, France's Foreign Minister Allain Juppe said that the matter must be taken up with the United Nations Security Council and that Paris is in favor of imposing tough sanctions on Iran.

Also Wednesday, a Chinese state newspaper said a standoff between Iran and the West over Iran's nuclear plans could erupt in military conflict.

Chinese policy-makers are caught between their demand for Iranian oil and worry that the United States and its allies will demand harsher sanctions against Iran, even risk military action, after the International Atomic Energy Agency concluded Iran appeared to have worked on designing an atomic weapon. "It is clear that contention between the various sides over the Iranian nuclear issue has reached white hot levels and could even be on the precipice of a showdown," the overseas edition of the People's Daily said in a front-page commentary.

If Iran refused to back down in the face of growing US conviction that it was developing nuclear weapons, "the risks of war will grow", said the paper, noting reports that Israel could consider a military strike on Iranian nuclear sites.

A commentary in the small-circulation overseas edition of the newspaper falls short of a formal government response, but it suggests the anxieties weighing on Beijing after the latest UN nuclear agency report. 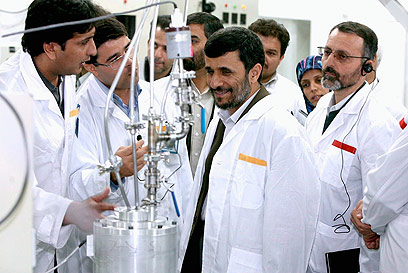 "There are no witnesses or physical evidence to prove that Iran is making nuclear weapons," it said.

"In dealing with the Iran nuclear issue, it is extremely dangerous to rely on suspicions, and the destructive consequences of any armed action would endure for a long time."

China is likely to face difficult choices as it tries to keep steady ties with the United States, which is likely to introduce new unilateral sanctions on Iran.

"If these sanctions harm China's substantive interests, then China will have to respond in some way," said Li Hong, the secretary general of the China Arms Control and Disarmament Association, a government-controlled body.

"It would certainly have an impact on bilateral relations," Li said in an interview.

"The onus will really be on China, as the only country whose economic relations with Iran have grown," Suzanne Maloney an expert on Iran at the Brookings Institution, a think tank in Washington, said in a telephone interview.

Over the past year or more, China has quietly stalled on oil and gas investments in Iran, seeking to ward off stricter unilateral sanctions from Washington while preserving a foothold in Iran. But that implicit deal will come under growing pressure, especially from Congress, said Maloney.

"They've had a compromise for the past 18 months of a go-slow in investment. But it's difficult to see how that bargain can hold in the wake of the latest revelations," said Maloney.

Citing what it called "credible" information from member states and elsewhere, the IAEA said Iran appeared to have carried out activities applicable to developing nuclear weapons, such as high explosives testing and developing a trigger that could be used for an atomic bomb.

But China has repeatedly resisted Western proposals for sanctions that could seriously curtail its energy and economic ties with Iran. As one of the Security Council's five permanent members, China holds the power to veto any resolutions.

China has also denounced the United States and European Union for imposing their own separate sanctions on Iran, and said they should not take steps reaching beyond the UN resolutions.

This week and last, China urged Iran to show flexibility over its nuclear programme and warned that the use of force to resolve the issue was the last thing the Middle East needed.

Li from the Chinese arms control association said Beijing was worried about the tension, but war remained a slim risk.

"The US economy is in poor shape, and Europe has its debt crisis," he said. "Iran is not like Libya; it has the strength to counter attack."