Did blast take place in missile base?
Photo: AP

Did blast hit Iran missile base?

According to opposition report, explosion that killed 17 soldiers outside Tehran took place in Revolutionary Guards' missile base

A military base rocked by an explosion Saturday that killed 17 soldiers and wounded at least 16 others may have taken place at a Revolutionary Guards base used to store Iran's long-range missiles.

An Iranian exile group claims that a blast at a military installation near Tehran has resulted from the explosion of rockets at a base for the missile forces of Iran's Revolutionary Guard Corps.

A former spokesman for the Mujahedin-e Khalq, or MEK, in Washington, citing reliable sources inside Iran, said Saturday that the explosion hit the Modarres Garrison of the Islamic Revolutionary Guard Corps west of Tehran. Alireza Jafarzadeh said the garrison belongs to the IGRC's missile unit and the blasts "resulted from the explosion of IRGC missiles."

An Iranian opposition report dating back to 2002 revealed that the village where the blast took place, west of Tehran, is home to a Revolutionary Guards missile unit responsible for the Shihab-3 missiles with a ragne of some 1,300 kilometers (roughly 800 miles.) 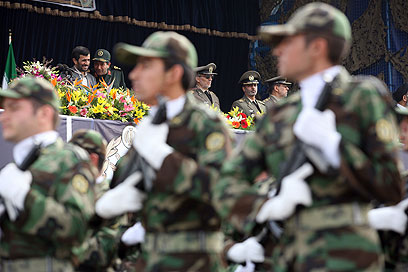 However, official Iranian spokesmen said the explosion was an accident and occurred while munitions were being moved in the base.

"My dear colleagues in the Revolutionary Guards were moving munitions in one of the arsenals at that base when, due to an incident, an explosion happened," Revolutionary Guards Spokesman Ramezan Sharif told news channel IRINN. "Some of the casualties are reported to be in a critical condition."

According to Iranian opposition report, yet another missile unit was stationed at the village and held huge quantities of weapons, including missiles handed over to Hezbollah.

While the report's credibility had not been confirmed yet, Iran's opposition has played a key role in uncovering secret military facilities across the country. In the past, opposition figures exposed the location of some of Iran's main nuclear sites.

Earlier, the semi-official Fars news agency carried a statement by the Revolutionary Guards which said the blast happened in an arsenal at a base in Bidganeh, near the city of Karaj, 25 miles (40 km) outside the capital. The Mehr News Agency said the site was closed to reporters.