Days after being caught calling Benjamin Netanyahu a "liar" in a private conversation with US President Barack Obama, French President Nicolas Sarkozy is now trying to minimize the damage.

The letter contains particularly harsh statements against Iran and is signed with the words "with friendship" in the French president's own hand-writing. The gesture is quite uncommon within diplomatic correspondence.

The letter was relayed to Netanyahu by French Ambassador to Israel Christophe Bigot. 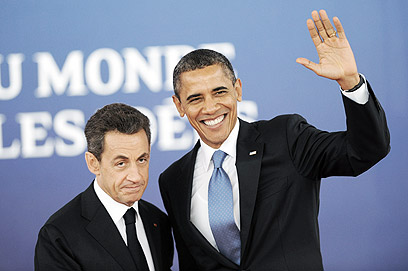 Obama and Sarkozy at the G-20 (Photo: MCT)
France has been trying to find a way to pacify Netanyahu since reports quoted Sarkozy as telling Obama "I cannot stand him. He is a liar" during the G-20 summit last week. On Wednesday, the White House said that working relations between Obama and Netanyahu were very good and that the president talks to Israel's prime minister more than any other leader.

This paved the way for a French apology. In his letter to Netanyahu, Sarkozy fiercely slammed Tehran, accusing it of spreading "propaganda lies" and promised that Paris will lead unprecedented sanctions against Iran at this week's IAEA Board of Governors meeting.

He offered Netanyahu a close cooperation on the issue of sanctions, signaling France will accept Israel's demands on toughening sanctions.

Israel is pressuring for an embargo on Iran's central bank and a full weapons embargo. Western nations have reservations regarding an oil embargo fearing a dramatic spike in oil rates. Ambassador Bigot said this weekend that "Israel has many friends who share the same concerns."

Meanwhile, French newspaper Le Figaro reported Saturday that Sarkozy's former envoy to the Middle East Valérie Hoffenberg asked the president to clarify the "misunderstandings" during a special visit to Israel, which may take place in January. She noted that Sarkozy has "accepted the idea," however the Élysée Palace has yet to confirm the report.

Searching for help, President Barack Obama lobbied the skeptical leaders of Russia and China for support in keeping Iran from becoming a nuclear-armed menace to the world, hoping to yield a "common response" to a crisis that is testing international unity.

With Medvedev on the sidelines of an Asia-Pacific summit here, Obama said the two "reaffirmed our intention to work to shape a common response" on Iran.

Shortly after, Obama joined Hu, in a run of back-to-back diplomacy with the heads of two allies that hold complicated and at times divisive relations with the United States. Obama said that he and the Chinese leader want to ensure that Iran abides by "international rules and norms."

White House aides insisted later that Russia and China remain unified with the United States and other allies in preventing Iran from developing nuclear weapons, and that Obama, Hu and Medvedev had agreed to work on the next steps.

Deputy national security adviser Ben Rhodes said the new allegations about Iran's programs demand an international response, and "I think the Russians and the Chinese understand that. We're going to be working with them to formulate that response."

Lior Zilberstein and AP contributed to this report