US reveals its new bunker-buster bombs

The US Air Force has taken delivery of a new 30,000-pound bomb from Boeing that is capable of penetrating deeply buried enemy targets.

The Bloomberg news agency reported Wednesday that based on a newly published Pentagon report, the huge bunker buster, dubbed the Massive Ordnance Penetrator (MOP), is built to fit the B-2 stealth bomber. 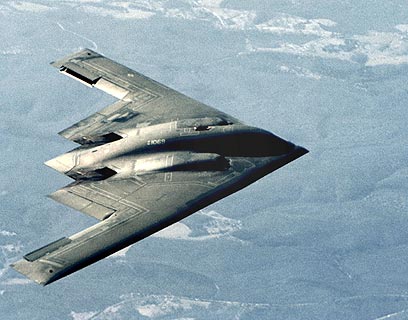 In 2009 the US Air Force said Boeing might build as many as 16 of the munitions. Miller had no details on how many the Air Force plans to buy.

In August Boeing received a $32 million contract that included eight of the munitions which had “completed integration” of the bunker-buster bomb with the B- 2, “giving the war-fighter increased capability against hardened and deeply buried targets.”

According to the report, the bomb is the US military’s largest conventional penetrator. It is six times bigger than the 5,000-pound bunker buster that the Air Force now uses to attack deeply buried nuclear, biological or chemical sites.

The B-2 has a shape and skin capable of evading radar. It is the only US bomber designed to penetrate air defenses such as those believed in use by North Korea and Iran. It is also the only aircraft currently capable of carrying the new bomb.

The B-2 has bombed targets in the Afghanistan and Iraq wars. In March three flew round-trip, non-stop missions from Missouri to Libya in the opening hours of US air strikes, dropping 45 bombs.

Little authoritative information has been published about the capability of the Massive Ordnance Penetrator. A December 2007 report stated that it has a hardened- steel casing and can reach targets as far down as 200 feet underground before exploding. The nuclear facility near Iranian city of Qom (Photo: AP)

The new, 20.5-foot-long bomb carries more than 5,300 pounds of explosives and is guided by Global Positioning System satellites.

The bomb delivery report comes at a time when the international community is trying to increase its efforts to convince Iran to abandon its nuclear program while reports on Israel's plans to carry out a strike against Iran's nuclear facilities are increasing.

The efforts have gone in to overdrive following the publication of the United Nations’ International Atomic Energy Agency report last week stating that Iran was trying to develop an atomic bomb to fit on a missile capable of hitting Israel.