A month after his release from Egyptian prison and his return to his parents' home in New York Ilan Grapel, who was held in Egypt for four months on espionage charges, shares the story of his hellish imprisonment in Cairo with Yedioth Ahronoth It was Sunday, June 12 at 8:30 am, Grapel was still sleeping when 30 men in civilian clothing barged to the room. Two of them asked him what his name was and which citizenship he carried.

Grapel pointed to his two passports, American and Israeli and hoped that would be the end of it: "I was sure they would take me to a police station and then the US Ambassador would arrive and everything would be fine," he recalls. 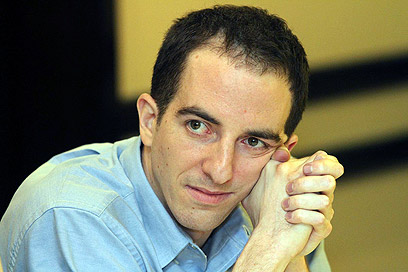 "But when they put the handcuffs on I started to get scared. When we got to the street and I saw the black van, they called it a 'limousine' my fears grew. Then I was blindfolded and put in the van. At this stage I knew they were Egyptian security services and I told myself: God, I just hope I don't become the second Azam Azam."

He spent 150 days in a four-by-four meter room, two weeks of which he spent in complete confinement that made him nearly lose his mind. Since his release on October 27, during which 25 Egyptian prisoners were released, he has been shutting himself in his parents home, trying to get used to his new situation. Grapel may be free, but the memories won't let him go. "At the beginning of the investigation, the Egyptian prosecutor told me I was suspected of spying. I answered in Arabic that there was nothing to talk about; he claimed that I needed a translator. I told him: "I'm learning Arabic and I'd like to improve my knowledge of the language. He didn't smile and told me: 'Are you crazy? You're looking at five life sentences'." In the holding cell Grapel tried to keep himself busy by exercising and in order to make sure that he didn't lose his voice he says he "hummed the songs I had heard at the youth hostel." He added: "I also tried to make every meal last as long as possible. I washed my hands before eating bread, that's five minutes and the blessing on the bread is another five minutes. "During the month of Ramadan I fasted and only ate in the evening so that the prison guards would see that I respect them and maybe like me, time just stood still."

Even now, when he is far away from Egypt and the threat of incarceration, Grapel emphasized: "I wasn't tortured in prison. Not in the conventional sense of the word. They didn't rip out my fingernails. They didn't break my back. But I spent 150 days in a room with a bed, a chair and a barred window, without any company, without having any idea what the next move would be."

During the interview Grapel shared one of the toughest moments of his time in Egyptian captivity: "After two weeks in solitary confinement I told the investigator: Give me the death sentence. He answered: 'That's not possible; there isn't war between Israel and Egypt." Grapel says that during his imprisonment he often thought of Gilad Shalit but asks that no comparisons be made between the two cases. "The circumstances are different," he explained. "He was taken hostage as a soldier in uniform; I was a civilian who came to help. I told myself that if Gilad was enduring fore fie years, I can't break. I would not have felt comfortable if I had been released in exchange for terrorists."

In retrospect, Grapel still finds it hard to understand exactly what the Egyptians wanted from him. "I think I was arrested because I am Israeli and I was released because I am an American. And I think it took such a long time because the Egyptians didn't know how to climb down the proverbial tree."