Hard-line Iranian students stormed the British diplomatic compounds in Tehran on Tuesday, bringing down the Union flag and throwing documents from windows in scenes reminiscent of the anger against Western powers after the 1979 Islamic Revolution.

Iranian media had conflicting reports of a possible hostage situation on the scene – these reports have not been confirmed by any official, British or Iranian. An Iranian news agency removed the report shortly thereafter.

The mob surged past riot police into the British Embassy compound – which they pelted with petrol bombs and stones – just two days after Iran's parliament approved a bill that reduces diplomatic relations with Britain following London's support of recently upgraded Western sanctions on Iran over its disputed nuclear program.

Less than two hours later, police appeared to regain control of the site. But the official IRNA news agency said about 300 protesters entered the British ambassador's residence in another part of the city and replaced British flags with Iranian ones. 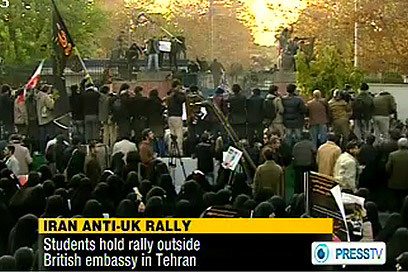 In clashes with the protesters Iranian police fired tear gas to disperse the crowd, the semi-official Fars news agency reported. According to Iranian reports, both protestors and policemen were injured in the clashes, and an unknown number of people were detained.

The British Foreign Office harshly denounced the melee and said Iran has a "clear duty" under international law to protect diplomats and offices.

"There has been a incursion by a significant number of demonstrators into our Embassy premises, including vandalism to our property," the foreign office said in a statement. "This is a fluid situation and details are still emerging. We are outraged by this. It is utterly unacceptable and we condemn it."

Later on Tuesday, the UK urged Iran to take urgent action to bring the situation under control.

"Senior officials have spoken to the Iranian charge (senior diplomat) in London to urge the Iranian authorities to act with utmost urgency to ensure the situation is brought under control and to protect our diplomatic compound, as they are obliged to do under international law," Britain's Foreign Office said in a statement.

The Foreign Office also updated its travel advice on Iran, advising Britons in the country to stay indoors and keep a low profile.

The semiofficial Mehr news agency said embassy staff had left the compound before the mobs entered, but it also said those who occupied the area had taken six staff as hostages. The agency removed the report shortly after posting it.

The protesters broke through after clashing with anti-riot police and chanting for its takeover. "Death to England," some cried in the first significant assault of a foreign diplomatic area in Iran in years. More protesters poured into the compound as police tried to clear the site.

Smoke rose from some areas of the embassy grounds and the British flag was replaced with a banner in the name of 7th century Shiite saint, Imam Hussein. Occupiers also tore down picture of Queen Elizabeth II.

The rally outside the British Embassy, on a main street in Tehran downtown, included protesters carrying photographs of nuclear scientist Majid Shahriari, who was killed last year in an attack that Iran blamed on Israeli and British spy services.

Outside the embassy, students from some universities and seminaries burned British flags on fire as clashing with police. State TV reported that another group of hard-line students gathered at the gate of British ambassador's residence in northern Tehran, at the same time.