Fars said 11 people, described as students, were set free late on Wednesday, a day after they were arrested for storming and ransacking the embassy and British diplomatic compounds in Tehran.

There was no immediate explanation for the release. Under Iranian law, damaging property carries a prison term of up to three years. It could, however, indicate the 11 have high-level protection from circles within the Iranian establishment.

The storming of the compounds was preceded by an apparently state-approved rally outside the British Embassy to denounce Britain's support for the latest round of US sanctions on Iran over its controversial nuclear program. 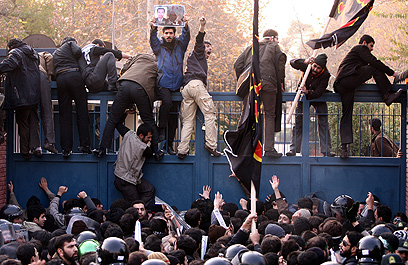 The incident has deepened Iran's isolation and significantly escalated tensions with the West.

It prompted Britain to pull its diplomats out of Iran, shutter the ransacked embassy and order all Iranian diplomats out of the UK within 48 hours. Germany, France and the Netherlands have recalled their ambassadors in solidarity.

Tuesday's rampage went on for hours, with the mob hauling down Union Jack flags, torching a vehicle and tossing looted documents through windows. Protesters replaced the British flag with a banner in the name of a 7th-century Shiite saint, Imam Hussein, and one looter showed off a picture of Queen Elizabeth II apparently taken off a wall. 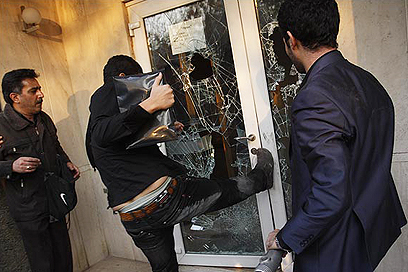 Protesters released after one night in Jail (Photo: Mher News)

However, hard-liners have spoken out in support of the protesters. Mohammad Mohammadian, a representative of Iran's Supreme Leader Ayatollah Ali Khamenei, praised the attackers, saying they had targeted the "epicenter of sedition."

And Iran's Parliament Speaker Ali Larijani said the "wrath of (the protesters) resulted from several decades of domination-seeking behavior of Britain."

The storming of the embassy came two days after Iran's parliament voted to reduce ties with Britain following London's support for the recently upgraded US sanctions on Tehran.

Tehran's relations with Britain have become increasingly strained over the past few months, largely driven by increasing tensions over Tehran's refusal to halt uranium enrichment – a process that can lead to nuclear arms. The West says Iran is developing atomic weapons; Tehran denies the claims.