Israel's eighth president speaks to media outside his home before leaving for Maasiyahu Prison following rape conviction: 'You're burying me alive'

Former Israeli president Moshe Katsav entered the Maasiyahu Prison just after 10 am Wednesday to begin serving a seven-year sentence for rape and other sexual offences.

In his last hours as a free man, Katsav's friends and relatives arrived at his Kiryat Malahi home to bid farewell. Police surrounded the street on which Katsav lives and dozens of security guards and prison wardens were posted at the prison ahead of the former president's arrival. The prison access road was blocked on all sides.

Speaking to reporters outside his home at around 9 am, Katsav claimed the documents that had been filed as part of his appeal, which was denied, contained testimonies that prove his innocence. "One day you will understand that you buried a man alive. One day the truth will be revealed. That day will come. I don't know when - it will happen with our without me," he said, adding that by sending him to prison the State was "executing" him "based on impressions – without testimonies or evidence."

Katsav was surrounded by dozens of supporters, some of whom called out, "We love you, Moshe" and "Moshe, you are righteous."

The convicted rapist said he would fight to prove his innocence. "All those who know me know that the accusations are false," he said. "Today a man is being executed because the court threw away real-time journals from 1998 – belonging to four difference people. 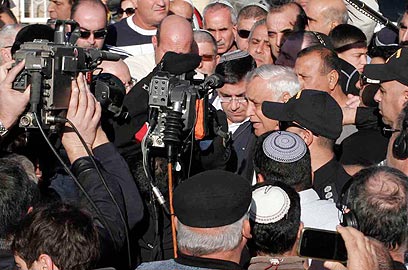 'The truth will come out.' Katsav speaks to reporters (Photo: Eliad Levy)

Many of Katsav's neighbors still believe he is innocent. "It's a fabrication. Even if he did commit the acts – he should not be punished severely. He is a former president, not just anyone," said Kiryat Malahi resident Nati Ayash.

Others demanded that Katsav be granted a presidential pardon. A Likud activist who visited the Katsav home during the morning hours said "we will shake the earth. Many people believe (Katsav) did not get a fair trial. I am going to collect signatures from citizens who do not support the court's ruling."

In a Tuesday night interview he gave to the New York Times, Katsav said: “I’m about to pay the price for something I haven’t done. I’ve hugged and kissed women but not in an inappropriate way. We’ve become like Saudi Arabia. A hug is a sex offense.”

In the interview Katsav also hinted at ethnic and class prejudice: “The fact is that I am from a Muslim country and from a development town,” he said. 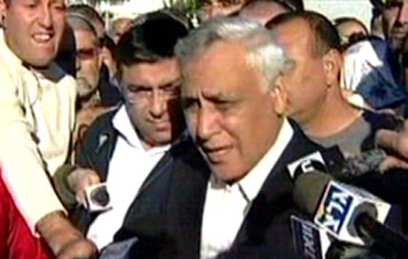 Katsav outside his home before leaving for prison (Photo: Channel 10)

A. from the Tourism Ministry, the main complainant against Katsav, told associates on Wednesday "this is not an easy day" for her. "I very much hope this whole nightmare is finally over," she said.

After his incarceration, Katsav's life is set to undergo a drastic change. Even though it has already been decided that he will serve his sentence in the religious prisoners' cell block at Maasiyahu prison, Katsav will still be facing additional admittance and screening procedures.

He will be interviewed by the prison's intelligence officer, a social worker and the prison commander. He will also undergo a medical exam. After the admittance process Katsav will be taken to his cell and begin routine prison life. His day will begin at 4:45 am with a roll call that will be repeated three times a day. As an inmate of the religious prisoners' cell block he will also be given time for morning prayers. Some inmates in the block work in the prison factories, others take religious classes. He will not have to wear a prison uniform as inmates in the religious prisoners' cell block are not required to do so. Katsav's incarceration brings the affair that shocked the entire nation to an end after five and a half years.

On December 30 2010 Katsav was convicted of two counts of rape, sexual harassment, indecent acts and obstruction of justice.