Katsav before incarceration: I was loyal to Gila

En route to jail former president tells AP his wife 'stands by him'; compares Israel to Saudi Arabia and Iran 'where people are convicted for a hug'

Headed to prison on a rape conviction, Israel's former President Moshe Katsav insisted he is an innocent man who has been faithful to his wife, and argued the country's legal system was wrong in accepting the word of a former employee over his in absence of any physical evidence.

"It is a surreal situation that hasn't happened in any democratic country in the world," Katsav said in a telephone interview with The Associated Press Tuesday night, hours before he entered a minimum-security prison to begin serving his seven-year sentence. "They are sending an innocent man to jail, period."

Israel's Supreme Court several weeks ago upheld a ruling by a lower court that accepted the allegations of a woman employed by Katsav in the late 1990s who said he had raped her. Katsav said it was wrong of the legal system to convict him based on a decision by the judges to prefer one version of events over the other.

"In my case there is no proof - just version against version," he said. "You can't judge a person based on impressions ... Some evidence, some proof, must be presented .... In these cases you need to bring more evidence, more proof, witnesses from real time, someone who saw something, bring DNA... there is 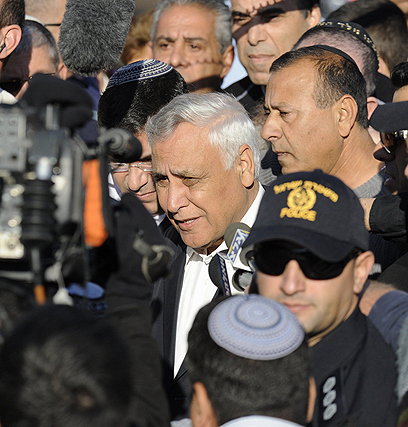 Katsav outside his home before heading to jail (Photo: AFP)

Katsav, 66, was convicted a year ago of raping the former employee while he was a Cabinet minister in the 1990s, and sexually harassing two other women during his presidency, from 2000 to 2007.

Repeatedly professing his innocence, Katsav remained free while he appealed. The Supreme Court upheld the conviction last month and ordered him to begin serving his sentence.

In the interview, a shocked and anguished Katsav presented himself as a victim, suggesting an array of personalities - from personal enemies, political rivals and a bloodthirsty media - had conspired against him. "There was a mixture of interested factors, politicians, police," he said.

He said his contact with his former employees had never gone beyond friendly hugs or pecks on the cheek, and insisted he had never touched anyone inappropriately.

"We have become like Saudi Arabia and Iran," he said. "They convict a person for a hug."

In recent months Katsav's lawyers suggested to the Supreme Court that the accusers had not proven coercion - implying that Katsav may have admitted to sexual relations with the accuser. But in the interview, the former president categorically denied any infidelity to Gila, his wife of 42 years. 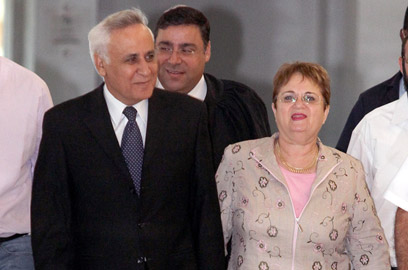 Mrs. Katsav has not commented publicly on the case, though she often accompanied her husband to court hearings. She was absent from his last appearance before the Supreme Court.

Katsav also argued that the trial - which was held behind closed doors - should have been open. "If they wanted to maintain the anonymity of the girls they could have done that behind a screen," he said.

He said the accuser was "a girl who I fired after a year of work in February 1999 because she was a terrible worker," and he claimed she was out for revenge.

"She wrote love letters to me saying she loved me ... I know that when she goes to sleep she knows that it is a lie," he said.

Katsav said he will "definitely continue fighting for my innocence" but would not say whether he intended to ask his successor, President Shimon Peres, for a pardon.

The Katsav conviction has been hailed as a victory for women's rights and equality under the law - particularly at a sensitive time when Israel's court system, known as a protector of Israel's liberal democracy, has come under assault from nationalists in the government.

It also marked an ignominious ending for a man whose rag-to-riches story had served as a symbol of success for Mizrachi Jews, those of Middle Eastern descent who have traditionally been an underclass in Israel. Katsav immigrated to Israel from Iran as a child and spent time in a tent camp before growing up in the he impoverished southern development town of Kiryat Malachi where he maintains his residence. 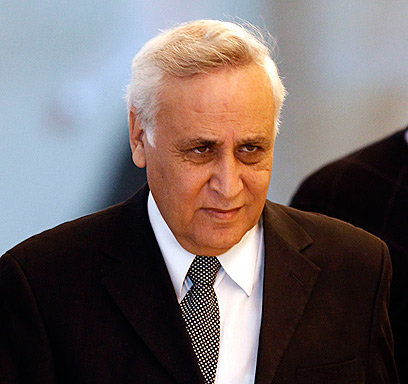 Katsav spent his last evening of freedom at home in a quiet gathering with friends and family, who joined him in the Jewish evening prayers.

Katsav will serve his sentence at a special section of the prison reserved for observant Jews, where the days include 4:30 am wake-up calls, morning prayers and hours of religious studies. His cellmate will be Shlomo Benizri, a former Cabinet minister who is serving time for accepting bribes.

Israeli TV showed pictures of a cell from the bloc where Katsav was to begin serving his time on Wednesday. The spartan room included a bunk bed, a small table and cupboard with some ketchup and chocolate spread.

Asked whether he had come to terms with what awaits him, Katsav described a "surreal" situation. "Imagine what a man is going through who is a grandfather to grandchildren, who was a country's president and is going to jail even though he is innocent and has done nothing wrong," he said.

Israel's presidency is a largely ceremonial office, typically filled by a respected elder statesman expected to rise above politics and serve as a moral compass. Most political power is concentrated in the hands of the prime minister.

The case against Katsav, which broke in 2006 after he told police one of his accusers was trying to extort money from him, shocked Israelis by portraying a man who had been widely considered a bland functionary as a predatory boss who repeatedly used authority to force sexual favors.

The lurid details of the case riveted Israelis. In one memorable moment, Katsav held a news conference in which he accused prosecutors and the media of plotting his demise because he didn't belong to the European-descended elite.

Katsav reluctantly resigned two weeks before his seven-year term was to expire in 2007 under a plea bargain that would have allowed him to escape jail time.

He was replaced by Peres, a Nobel peace laureate and former prime minister. But he then rejected the plea bargain, vowing to prove his innocence in court.