Jerusalem municipal officials said they will shut down a walkway to a contested shrine at the heart of the capital city, a move liable to touch off a new round of violence between Muslims and Jews.

The municipality said the Mughrabi Bridge – a wooden walkway that connects the Western Wall and Temple Mount – is a fire hazard and structurally unsound and must be replaced.

Any work in the area around the Old City compound of Temple Mount draws fierce condemnation and sometimes violence from Palestinians, many of whom suspect Israel wants to harm Muslim shrines. An official with the Muslim clerical body that runs the complex warned that protests were liable to break out this time, too. 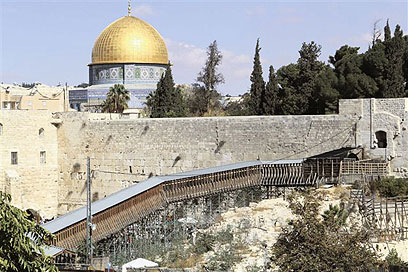 In a letter released Thursday, Jerusalem city engineer Shlomo Eshkol informed authorities of his plan to block access to the walkway to all but security forces. The shutdown could take place immediately after a one-week public comment period.

Prime Minister Benjamin Netanyahu halted a plan to demolish the walkway last month, fearing a regional backlash at a time when pre-election violence was roiling Egypt. A spokesman for Netanyahu was not immediately available Thursday for comment on the Jerusalem municipality's latest move.

The walkway is not the only access to the contested complex, which Israel captured from Jordan along with the rest of east Jerusalem and the West Bank in the 1967 Six Day War. But the compound's centrality to both Islam and Judaism makes it one of the most combustible sites in the world. Clashes there in the past have ignited broader violence.

Hundreds of people make use of the passage everyday, including tourists, worshipers and security forces. Shutting it down would cut off Jewish access to Temple Mount. The bridge was built as a temporary structure after a centuries-old ramp was damaged in a 2004 snowstorm.

A Muslim clerical trust known as the Waqf runs the compound under Israel's overall security control.

Yusuf Natsheh, director of the Waqf administration, said the Waqf was not consulted about the plan to shut down the walkway, which he called a "disastrous" policy liable to touch off protests.

"This is a very sensitive issue," he said. "It is so close to the mosque, and Palestinians, Arabs, Muslims ... all over the world will be unhappy."

Omri Efraim and Attila Somfalvi contributed to the report.