Getting to know Israel by foot: A group of young Jewish Americans completed the Israel National Trail this week after hiking across the country's longest trail for the past five months. The trip  part of a new program organized by the Israeli travel agency Tlalim on the government's behalf.

In September a group of 15 young men and women set off on the trip of a lifetime, but more then half of them quit mid-way during the grueling journey. They began their hike in the northern city of Kiryat Shmona, where they learned to speak Hebrew during the first month. They also renovated local bomb shelters.

Then the group headed on a 1,000 kilometer (621 miles) trek crossing Mount Meron, Lake Kinneret (the Sea of Galilee), the Israeli coastal plain, the Jerusalem mountains and the Negev's craters. 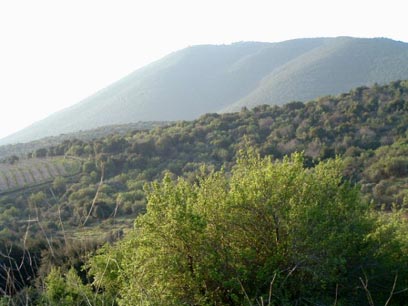 Photo: Society for the Protection of Nature in Israel
Along the way, the group engaged in agricultural labor, enjoyed jeep rides and experienced free-fall parachuting. The youngsters also experienced Israel's night life, including Tel Aviv's dance clubs, Jerusalem's beers and the wines of the Golan Heights. Daria Datnuf, 23, was pleased to say she had met some warm and wonderful people during her stay in Israel, insisting it would be very hard to leave the Jewish state and head back home to the United States. She then quickly added that Israel is also her home now.

The group experienced the "real Israel," as they saw how African infiltrators were caught by the Immigration Police in Eilat, visited Bedouin villages in the south and even celebrated Shabbat in the West Bank settlement of Ofra. 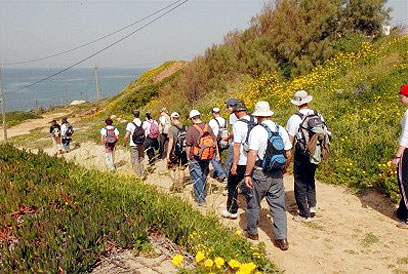 Israel National Trail Photo: Avner Yaron
The group's tour guide was Omer Kahana, 23, who was recently discharged from his army duty in an elite IDF unit. "I'm very proud of them," Kahana said. "This is the first time they're really doing something hard, and succeeding. They lack the combat abilities, but on the journey they truly became Israelis." The journey costs $9,500 - $3,000 of which are funded by the State of Israel. For that price the participants receive nearly six months worth of meals, tour guides and outdoor sleeping arrangements. Rachel Herman, 22, from New York, remarked she had never seen so many stars before. She explained they all slept in sleeping bags in the desert and felt as though they were part of a National Geographic film. The sites were amazing, added Herman.

One participant even chose to alter his plans to return home, opting to stay in Israel a while longer.

Elias Zwang, 23, from San Francisco said he canceled his return ticket and is planning to become a tour guide in Israel. Zwang believes he now learned what is truly important in life and what interests him.

The Israel National Trail hike is part of Masa Israel, a program initiated by the government and the Jewish Agency, intended to bring young Jews from across the globe to Israel.

Those who take part in the program can chose whether to learn Hebrew, teach English, work on farms or volunteer. The Israel National Trail program is designated for university graduates.