Iran opened a key space facility to visiting journalists for the first time Wednesday in an apparent effort to show its willingness to allow glimpses at sensitive technology even as Tehran and UN inspectors trade accusations about access to nuclear sites and experts.

The press tour of the Alborz Space Center, about 40 miles west of Tehran, also sought to showcase Iran's advances in aerospace sciences less than a month after it announced another satellite was launched into orbit.

Iran's ambitious space program has raised concerns in the West because of possible military applications. The same rocket technology used to send satellites into orbit including the February 3 launch of the domestically made Navid (Gospel) can also be retooled to create intercontinental warheads. 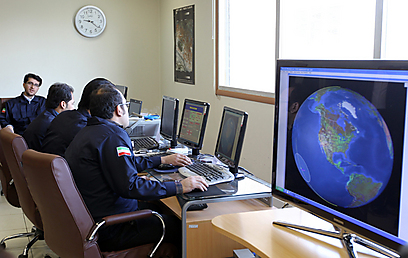 The space center visit by nearly 50 journalists for international media comes as Iran and the UN nuclear watchdog agency are locked in disputes over access to officials and key sites in the Islamic Republic's atomic program.

The West and allies fear Iran's uranium enrichment labs could eventually produce weapons-grade material. Iran says it only seek nuclear power for energy and medical research. Allowing journalists into the space facility could be an attempt to discredit UN claims that Iran is keeping a tight lid on its technological capabilities. Director of the project Mojtaba Saradeghi said that sanctions prevented Iran from buying some of the key equipment needed to build Navid, but Iranian space experts were able to design and produce the equipment. Iran is intent on highlighting technological successes as signs Iran can advance despite Western sanctions over its disputed nuclear program.

Iran sent its first domestically made satellite, called Omid (Hope), into orbit in February 2009. Iran's space plans are wide-ranging and even hold out the goal of putting a man in orbit within a decade.

In 2005, Iran launched its first commercial satellite in a joint project with Moscow, which is a partner in transferring space technology to Iran along with North Korea and China. That same year, the government said it allocated $500 million for space projects in the next five years.

Iranian officials also point to America's use of satellites to monitor Afghanistan and Iraq and say they need similar abilities for security.