In interview with Turkish magazine, King Abdullah says Jewish State suffers from 'growing popular resentment from Arab neighbors, including the very moderate ones'

Jordan's King Abdullah said that "The Arab uprisings have obviously increased Israel’s isolation, as was immediately made evident by the storming of the Israeli embassy in Cairo last year."

In an interview with Turkish Policy Quarterly (TPQ) magazine published Saturday, the King was asked whether the deterioration of relations between Turkey and Israel has had an effect on peace talks with the Palestinians.

"A few years back, President Clinton told me that the Israelis will only negotiate from a position of strength. And a position of strength is not where they are today, reportedly breaking ranks with the US on Iran, having damaged their relations with Turkey, and facing growing popular resentment and increasing isolation from their Arab neighbors, including the very moderate ones," Abdullah noted. The King noted that Israel has a choice in the matter: "It can see, in a changing, region a compelling reason to seriously engage in meaningful peace negotiations to solve all final status issues and realize a two-state solution, or it can continue to dig its heels in on the false pretext that regional change precludes peace negotiations, which could entail serious implications for Israel and its future place in a post-Arab 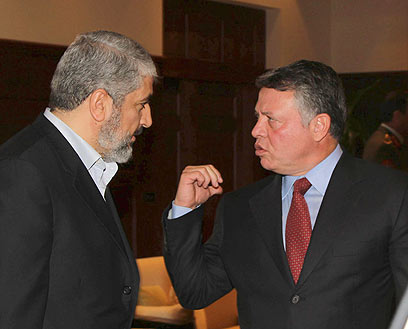 King Abdullah (R) with Khaled Mashaal in Amman (Photo: Reuters)
Asked to comment on the progression of the negotiations, Abdullah took a pessimistic tone. "Solving the Palestinian-Israeli conflict and achieving the two-state solution is a national interest for Jordan, and it is in the best interest of the entire region and the world. Jordan has never spared any efforts to achieve peace and will always continue to work for a just solution to the Palestinian-Israeli conflict. "To us, peace always was and remains a strategic choice. But popular frustration at Israeli policies is at a peak across the region, and even traditionally moderate parties and groups are starting to question whether seeking or keeping peace with Israel makes sense any more."

Referring to the escalating situation in neighboring Syria, Abdullah told TPQ that "Syria is the biggest question mark at the moment. It is impossible to predict how the Syria situation will evolve and fully and comprehensively assess its ramifications on Iran, Hezbollah, Hamas, Iraq and all other players and countries in the Middle East.

"The only certain thing is that the Syrian crisis is placing new burdens and responsibilities on the neighbors, namely both Turkey and Jordan, starting with looming prospects of a humanitarian emergency," he added. Asked about the growing crisis between Iran and the West, the Jordanian King stated that "Reviving the peace process is key to defusing any present or future standoff with Iran. We need to shift the focus back on resolving the Palestinian-Israeli conflict. This unresolved conflict offers a rallying point for any entity wishing to gain the emotional support of over one billion Muslims around the world. "Jordan, on our part, remains firm on its position that while Iran must show genuine will to fulfill its international obligations, any military action against Iran would aggravate instability in the Middle East, and have greatly negative repercussions for the US, Europe, and Israel. The region does not need

yet another crisis at this stage."

The Hashemite King commented on his January meeting with Hamas Politburo Chief Khaled Mashaal, which ended a long period of discord between the Islamist party and the Jordanian monarchy. "(The meeting) was in the framework of Jordanian support for peace efforts, Palestinian reconciliation, and the Palestinian National Authority’s efforts to realize the aspirations of the Palestinian people," Abdullah said, adding that he had reiterated Jordan’s stance that “What is required of Europe and the US at this stage is to judge the new emerging governments by the same standards as they will be judged by their own voters: their ability to deliver stability, security, democratic reforms, civil rights, jobs, and economic growth.”