Embassy under siege: Israeli guards fired in the air

New evidence which surfaced Sunday sheds light on the drama that went on in Cairo as an angry Egyptian mob stormed the Israeli embassy threatening to lynch the six security guards stranded inside a security room in the building.

Several hours into the mass protest in Cairo, the mob succeeded in breaking two of the three doors that led to the security room at the embassy. When the mob reached the final door, the guards could hear the noises from outside as well as loud bangs on the door.

More on the Egypt embassy riots:

At this critical time, when it was yet unclear how long they could last, the Israelis began final preparations for the battle of their lives. Using every object they could find, the guards built barriers near the door in the hopes of preventing intrusion. 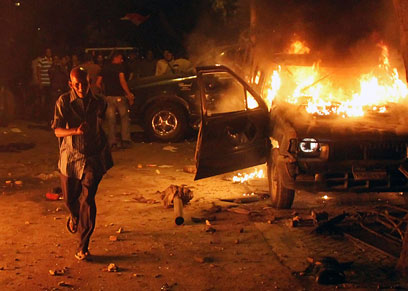 Three out of the six guards were carrying weapons and at a certain point as the rioters moved closer, they fired warning shots into the air.

This apparently caused the mob to move elsewhere, as security officer Yonatan told Prime Minister Benjamin Netanyahu over the phone. The six were eventually rescued by Egyptian commandos who instructed them to wear traditional Arab headdress and Muslim garments as camouflage.

A senior Israeli official who was present at the Jerusalem Command Post, criticized the Egyptian authorities for taking too long to respond. He noted that the guards only narrowly escaped a lynch: "Thank God they didn't break through that last room. Had they broken the door, a great disaster would have happened: both a human tragedy and a strategic disaster for the peace with Egypt."

Egypt's Justice Minister Abdul Aziz Al Jundi said Sunday that the "events outside the Israeli embassy came as a shock to any Egyptian citizen who loves his country."

Speaking at Sunday's cabinet meeting, Netanyahu praised the Egyptian voices that condemned the storming of the embassy. "I am glad there are other voices in Egypt and the administration that want to promote peace and maintain it." He said that the government is discussing the return of the Israeli ambassador and diplomatic staff to Cairo with the Egyptian administration.

Addressing the matter Defense Minister Ehud Barak said "the incident was complicated and very dangerous; we were a hairsbreadth from loss of life and potential for massive damages."

According to Barak, "the diplomatic triangle created between Israel, Turkey, Egypt and the Palestinians and the worn out intimacy with the US, our situation with the quartet and the Europeans ahead of the UN decision, these are things we must discuss."

Prime Minister's Spokesman Roni Sofer said that "joint efforts with Egypt to reorganize the security arrangements for the return of the ambassador and the diplomatic staff to Cairo are continuing. The prime minister intends to complete the process as fast as possible."

Meanwhile, an Israeli security source said: "It was fully justified to keep the men there. Nothing that should not have been broken into was broken into."

Having spoken to security officer Yonatan, whom Netanyahu mentioned in his Saturday speech, he claimed that reports of a near-lynch were exaggerated. "I was there several times and have spoken to Yoni and the reports do not exactly reflect reality."

He noted that such countries provide "unimaginable" sums to various groups and foundations within Egypt and claimed this proves Saturday's events are part of a campaign to damage national security. 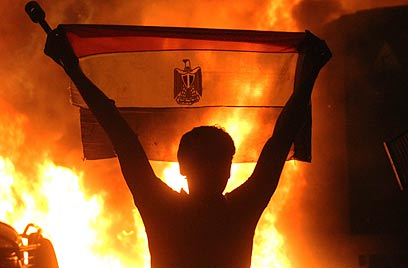 Egyptian daily Al-Ahram followed the same line. The paper quoted an Egyptian security source as saying that "the events were meant to hurt state institutions and are part of a plan with three goals: Implicating Egypt's armed forces in a conflict, postponing or preventing parliament elections to avoid stability, and implementing outside agendas meant to embarrass Egypt in the eyes of the international community."

Other papers stressed that various political movements in Egypt do not approve of the violence and quoted activists who endorse non-violent protest.

Al-Masry al-Youm said that the "forces of the revolution" renounced the events and blamed "remnants of the old regime," the current regime, the US, Arab states and even Israel itself for the incident.

The weekend's events received extended coverage in the US media, many expressing concern over the security level at US embassies throughout the globe.

According a report in the Washington Post, diplomatic sources at the US embassy in Cairo claimed that “they just turned a blind eye when all this was going on toward the Israelis, for week after week.” Now the council is “in the terrible position where they have to show that they’re strong,” a western diplomat said.

Meanwhile, the official Egyptian news agency reported that Israel's embassy in Jordan was reinforcing security measures. Eye-witnesses claimed that they saw armored vehicles and a large number of security forces on the streets leading to the embassy.

Security has also been boosted around the Egyptian embassy in Tel Aviv. Border Guards were joined by a police car and were instructed to call the Tel Aviv police upon any unusual event and to remain alert.