Two senior terrorists were killed in Gaza Friday, after IDF aircraft targeted a vehicle in the Strip, the army confirmed.

One of the fatalities is Zuhir al-Qaisi, the secretary-general of the Popular Resistance Committees terror group, Palestinian sources said. The second terrorist killed in the strike is Ahmad al-Khanini, a senior PRC member freed in the Shalit prisoner swap, the Palestinians said.

The army confirmed that aircraft carried out a targeted assassination and that the PRC's chief was among the fatalities.

Al-Khanini was a Nablus-area resident who headed a PRC terror cell in the region. His cell prepared two explosive belts, one of which was seized in the possession of a terrorist en route to an attack in Jerusalem in 2006.

Following his release in the Shalit deal in October of 2011, al-Khanini was expelled to the Gaza Strip.

The PRC is one of the three terror groups behind IDF soldier Gilad Shalit's abduction to Gaza. The organization is also responsible for numerous rocket attacks at southern Israel communities in recent years.

Earlier Friday, senior IDF officials said the ongoing rocket fire from Gaza will not be tolerated, even if the strikes cause no injuries,

The comments were made after two mortar shells were fired by terrorists at Eshkol region communities, and following a quiet week in Gaza where the IDF refrained from operating in the Strip. 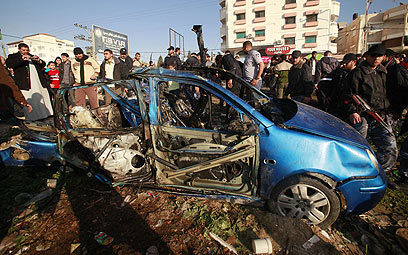 "This is not quiet, but rather, constant tension and a permanent atmosphere of terror where tens of thousands of citizens are trying to go on with their lives," one military official said. "We cannot continue with this hostile reality."

"Even if the rockets don't hurt people, they sow fear that must be stopped," he said. Army officials said they view Hamas as the sovereign responsible for the Gaza Strip and stressed that it should be curbing the rocket fire, even if attacks are carried out by other factions or by the Islamic Jihad organization. Following the rocket fire at the south in recent days, Israel's United Nations Ambassador, Ron Prosor, sent a letter consisting of only two lines to UN Chief Ban Ki-moon and to members of the Security Council.

In the letter, Prosor noted that 10 rockets were fired at Israel in 10 days, without any condemnation by the UN, wondering how long the silence would last.

Elior Levy contributed to the story