Thousands attended the funeral of four Jews who were murdered in an attack at a Jewish school in Toulouse at Jerusalem's Givat Shaul cemetery on Wednesday. Chapters of Psalms were read out at the beginning of the funeral.

Knesset Speaker Reuven Rivlin said in his eulogy, "In Toulouse and Jerusalem, in New York and Buenos Aires, Jews of all factions stand with us with deep pain in their heats and tears in their eyes. Again we stand before small, silent bodies, before small graves." He added, "The Jewish people face wild and insatiable animals, wild animals made crazy by their hatred, murderers who do not distinguish between a settler and a leftist, a Jew in Israel and a Jew in the Diaspora. They are aware of the unbreakable bond between all Jews. They understand that the divides between us are just an illusion.

"But they also know where to hurt us. They recognize our most sacred values…but we will not let them prevail over us. The State of Israel has the duty to ensure that Jewish lives can be maintained anywhere in the world." 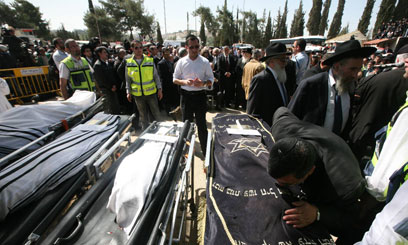 Interior Minister Eli Yishai also spoke at the funeral. "We expect the French government to take the most severe measures against the culprits, to persecute anti-Semitism and its supporters until salvation is reached." Israel's chief rabbis Shlomo Amar and Yona Metzger also eulogized the victims. Amar broke down in tears when he spoke of 8-year-old Myriam Monsonego.

French Foreign Minister Alain Juppe said at the funeral that the murder shocked all the people of France. "Your grief, your pain is ours too. All of France is in shock," he said.

Juppe stressed France's determination to fight anti-Semitism and said that the 65 million French citizens will not tolerate any attack on Jews. 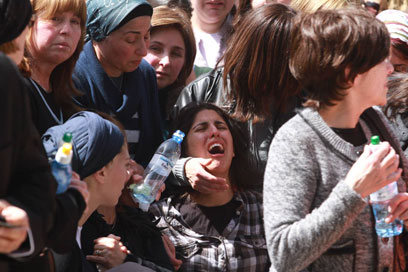 Earlier he said at a meeting with Israeli President Shimon Peres that he had come to express "the solidarity of the French people with the Israeli nation" in its time of sorrow.

"The blood of both our peoples was spilled in this murder," he said.

"We have lost a true soul," Monsonego's aunt told Ynet earlier on Wednesday. "We have been left with a huge void." Monsonego's parents arrived at the Shamgar funeral house in Jerusalem to say goodbye to their beloved daughter. They were accompanied by family members and wept bitterly. The mother lit a memorial candle. At a memorial ceremony held at the Ozar HaTorah school before the bodies were flown to Israel, Rabbi Sandler's widow said, "He came here to study, and traveled back and forth between Toulouse and Bordeaux to help children with learning disabilities. He gave his all for this noble cause."

Eva Sandler, who is pregnant and has another one-year-old girl, added: "People ask how they can help me. I tell them to keep the mitzvahs and follow the word of the Torah. If this holy audience keeps the mitzvahs, I believe my children's souls will be accepted into heaven."

During the service, Toulouse Chief Rabbi Avraham Weill said, "The Jewish values are the same as those of the French republic – the republic that belongs to us all."