Prime Minister Benjamin Netanyahu met with representatives of the Palestinian Authority at his Jerusalem office Tuesday evening. Senior Fatah official Saeb Erekat and the head of the Palestinian General Intelligence Service, Majed Faraj, were among the delegates from the PA.

"Israel and the Palestinian Authority are committed to peace," a statement released after the meeting read. 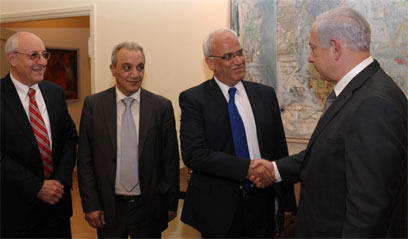 The Palestinian officials handed Netanyahu a letter from Palestinian President Mahmoud Abbas outlining the Palestinians' conditions for jumpstarting the peace process. The prime minister is expected reply within two weeks.

The meeting lasted a little over an hour.

Israeli officials said the missive delivered by the Palestinians does not include any new or surprising details. They said the letter Netanyahu's aide Yitzhak Molcho is expected to deliver to the Palestinians in about two weeks will outline Israel's position vis-à-vis the peace process.

"It's unlikely that the documents being exchanged between the sides will change the situation on the political front," a source who is familiar with the letters' content said.

In the letter to Netanyahu, Abbas said the Palestinian Authority has been left powerless.

Israeli officials believe the Palestinians will resurrect their statehood bid at the United Nations. Sources close to the Palestinian leadership in Ramallah said Abbas is leaning in this direction but prefers to wait until after presidential elections are held in the US so as not to further strain relations with President Barack Obama.

Palestinian Prime Minister Salam Fayyad pulled out of the meeting with the Israeli leader, torpedoing what was set to be the highest-level talks between the sides in nearly two years.

The Palestinians portrayed the meeting as a last-ditch effort to salvage peace talks before the US election season. But shortly before the meeting was to start, Palestinian negotiator Erekat said that only he and a Palestinian security official, Majed Faraj, would attend.

"We are on our way," he said, giving no explanation for Fayyad's absence.

Fayyad's reason for pulling out of the meeting remains unclear, but the Palestinian Ma'an news agency reported that he did not want to meet his Israeli counterpart on the same day that more than 1,000 Palestinian prisoners launched a hunger strike to protest their incarceration conditions in Israel.

Substantive negotiations collapsed more than three years ago, in large part over Israeli settlement building in the West Bank and east Jerusalem. The Palestinians say there can be no negotiations as long as Israel continues to build in occupied territories they claim for their future state. Israel says talks should resume without preconditions.

The letter says Israel must freeze all settlement construction and accept its pre-1967 war boundaries as the basis for the borders of a future Palestine, with mutually agreed upon modifications, according to drafts of the document obtained by The Associated Press. Israel captured the West Bank, east Jerusalem and Gaza -- the territories claimed by the Palestinians -- in the 1967 Mideast war.

Abbas has said in recent days the letter also accuses Israel of undermining the Palestinian Authority, his autonomy government that rules in parts of the West Bank.

Speaking to reporters in Colombo, Sri Lanka, Abbas said he was hopeful for progress.

"We will tell (Netanyahu) that he should commit to stop settlements and to recognize the two-state solution based on the 1967 borders and then we will return to the negotiating table," he said. "He has intensified the settlements and the solution was to send him the letter in which we stress the status quo cannot continue, and we can't accept it forever."

Foreign Minister Avigdor Lieberman said Tuesday that Abbas is not interested in reaching a peace agreement with Israel and accused the Palestinians of blaming Israel for their woes instead of working to solve their internal problems.

Speaking during an official visit to Cyprus, Lieberman said all issues should be addressed during direct talks between the sides without pre-conditions.