Shas chairman Yishai visits army reservists calling for universal service law; calls on 'all those who do not study Torah' to enlist

Shas Chairman Eli Yishai visited the IDF "suckers' encampment" in Jerusalem on Monday amid efforts by some factions to pass legislation that would replace the controversial Tal Law before the Knesset's dissolution.

Following the visit, the army reserve sodiers, who are calling for a universal service law, leveled harsh criticism at the government and Prime Minister Benjamin Netanyahu. 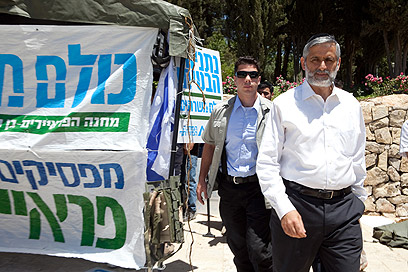 The reservists attacked Shas Minister Meshulam Nahari's appeal against a decision by the Ministerial Committee on Legislative Affairs to submit two bills calling for universal IDF or civil service for a first reading in the Knesset. The appeal effectively "froze" the proposals for the time being.

"If (the appeal) was in fact part of a deal between Netanyahu and Shas, then he (PM) has deceived us and the entire public," said Idan Miller, one of the protest's organizers. "Just last week he told us he'd pass the legislation before the elections."

Yishai told the reservists that thousands of ultra-Orthodox want to enlist in the IDF, "but the army is not interested in recruiting them."

The Shas chairman further claimed there was a sharp increase in the number of haredim attending institutions of higher education. He said the trend "began a decade ago with 24 (university) students, and today we have 3,000."

According to Yishai, the "campaign against the country's ultra-Orthodox community is based on "hatred and nationals rifts."

"This campaign is aimed at trampling over every Jewish value. From the destruction of the Second Temple to this day the nation of Israel has existed because of the Torah. I call on all those who do not study Torah to immediately enlist (in the army), otherwise they are desecrating god's name," he said.