Social protest is back? Thousands of Israelis gathered Saturday evening at Tel Aviv's Rabin Square for a rally activists characterized as the opening shot of a renewed nationwide social protest.

Earlier in the day, demonstrators marched from various locations across the city, before meeting at the Square for the evening's main event. The protestors held signs calling for "sane housing prices," greater equality, and the initiation of a "Hebrew spring" – referring to last year's Arab world upheaval known as the "Arab spring."

Masses out for biggest protest in Israel's history

Some protestors attempted to block roads in the area. At least nine people were detained at the site by police.

Simultaneously, rallies were being held in Haifa, Jerusalem, Kiryat Shmona and Pardes Hana. In Haifa, hundreds of demonstrators marched while chanting "We, the majority, are returning to the street" and condemning ties between the government and Israel's industrialists. 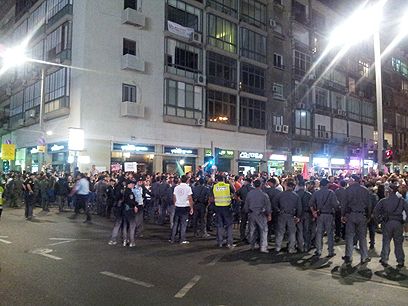 Hundreds of people also hit the streets of the capital and marched past Prime Minister Netanyahu's official residence in Jerusalem.

'We want a simple life'

National Student Union Chairman Itzik Shmuli, who was among the leaders' of last year's social protest, said that young Israelis were "determined to fight for the country's future."

"The cosmetic response provided by the government to the problems raised by the social protest does not satisfy us," he said. "We're preparing for the possibility of renewing the protest in full force should the government continue its foot-dragging." 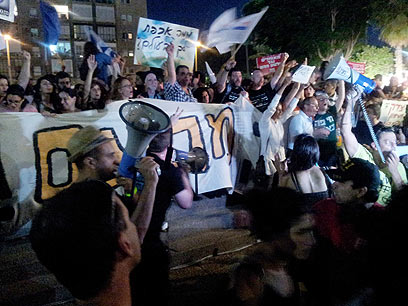 Is social protest being revived? (Photo: Moti Kimchi)
Gil, 35, told Ynet protestors are demonstrating against "everything." "We are protesting against the way we're being cheated and screwed," he said. "We want a simple life and this can be done. We have to change the system." Last summer, hundreds of thousands of Israelis hit the streets in several protests to demonstrate against Israel's skyrocketing cost of living and related issues. The protest wave prompted Prime Minister Benjamin Netanyahu to set up a committee dedicated to addressing the concerns raised by demonstrators.

Gilad Morag and Ahiya Raved contributed to the story