A Border Guard officer sustained light injuries Monday evening when he was stabbed by a Palestinian near the Cave of the Patriarchs in Hebron. During the confrontation the officer shot the terrorist, who was severely wounded.

The officer, who was stabbed in the head, was evacuated to Jerusalem's Hadassah Ein Kerem Hospital.

A paramedic who arrived at the scene told Ynet "I noticed the terrorist lying on the floor with bullet wounds in his stomach. The officer was bleeding from the head." 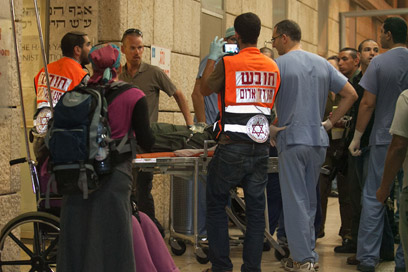 The incident took place at a checkpoint located near the entrance to the Muslim part of the Cave of the Patriarchs. The terrorist arrived at the checkpoint, pulled out a sharp object and stabbed the officer in the head.

On Friday Golani Staff-Sergeant Netanel Moshiashvili (21) of Ashkelon was killed by a Palestinian terrorist near the Gaza-Israel border. The incident took place at around 5 am, when the gunman, under cover of the heavy fog, was able to reach the security fence, cut it and infiltrate Israel.

A Golani force was scrambled to the area and engaged the terrorist, who opened fire. The terrorist – later identified as Ahmed Abu Nasser, from the border village of Abassan – was killed. The gunfight left Moshiashvili, one of the force's medics, mortally wounded. IDF medics attempted to stabilize his condition, but he succumbed to his wounds.

Last month a terrorist tried to stab and IDF officer at the Gush Etzion Junction on Route 60. The Palestinian terrorist was severely injured during the struggle with the officer, who was not hurt.

The terrorist, a Hebron resident, hid among Israeli bicycle riders who were at the junction, walked up to the soldier and tried to stab him. After a struggle which ended with the Palestinian in serious condition, the terrorist received initial medical care at the scene and was then evacuated to the Hadassah Medical Center for additional care.