No intervention against Assad?
Photo: Reuters

Moscow, Beijing say they are 'decisively against' foreign military intervention in Damascus' affairs; imposing any kind of regime change

Moscow and Beijing on Wednesday reaffirmed their strong opposition to intervention in Syria, under mounting international pressure to change a stance that has infuriated Western powers.

A joint statement issued after talks between China's leaders and visiting Russian President Vladimir Putin in Beijing said the two countries opposed any attempt to impose regime change in Syria after 15 months of bloody conflict.

"Russia and China are decisively against attempts to regulate the Syrian crisis with outside military intervention, as well as imposing a policy of regime change, including within the Security Council," it said. 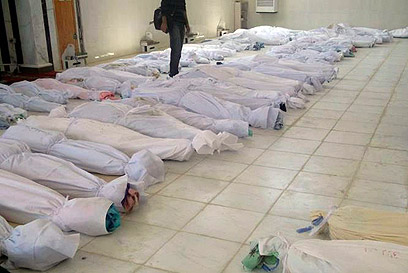 But as Syrian government troops continue to fight armed rebels in a conflict that has now lasted 15 months, doubts have emerged over the effectiveness of Annan's plan, which came into effect mid-April.

Rights groups say more than 13,500 people have died in the Syrian uprising since March 2011, and Western powers are pushing for increased pressure on al-Assad to stop the regime's assault against the population. On Wednesday Russian Foreign Minister Sergei Lavrov told reporters in Beijing heeding opposition groups' calls for the forcible removal of the Assad regime would lead to "catastrophe" in the conflict-torn state.

He reaffirmed China and Russia's support for the Annan plan, and called for a new international meeting on Syria to include Turkey and Iran.

"We think it is necessary to call a meeting of countries that truly have an influence on various opposition groups," he added, citing the five permanent members of the UN Security Council, the Arab League, the European Union, Turkey and Iran, after meetings with Chinese leaders. The two also came out against any use of military force or "unilateral sanctions" against Iran, in the statement released after China's Premier Wen Jiabao met visiting Iranian President Mahmoud Ahmadinejad.

The West believes Iran is trying to develop an atomic bomb under cover of a civilian program, although Tehran insists its intentions are purely peaceful.

Ahmadinejad is expected to seek support for his country's stance at the two-day summit of the Shanghai Cooperation Organization (SCO), which was set up in 2001 to allow Russia and China to rival US influence in Asia. Putin and Ahmadinejad will meet on Thursday, as Moscow prepares to host more talks later this month aimed at finding a diplomatic solution to the standoff over Iran's nuclear ambitions. Moscow and Beijing have remained in lockstep over Syria, opposing foreign intervention and forced regime change in the conflict-torn nation