Violent night in Tel Aviv: Social activists in Tel Aviv clashed with police across the city Saturday evening, at one point shattering windows and charging into banks in what is shaping up as unprecedented socioeconomic riots. Some 85 people were arrested throughout the night.

The night started with a rally against police violence, as some 2,000 protestors gathered in Tel Aviv's Habima Square a day after 12 activists were detained by police during a social protest.

Thousands take to streets in demand of social justice

The demonstrators claimed police used uncalled for violence during Friday's rally, holding up signs reading "Don't touch my body, I have a right to speak up" and "Dear police officer, please don’t disrupt this citizen in performing his duty."

Soon after, violent clashes erupted at various locations across Tel Aviv, including at banks near the city's Rabin Square. Protestors shattered windows at some banks, in one case making their way into the bank with a tent, the symbol of last year's housing protest, and barricading themselves inside. 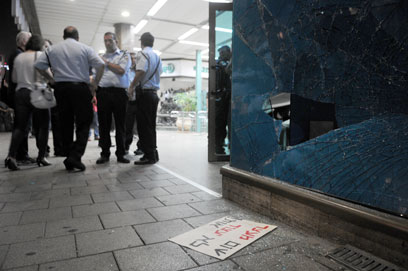 Elsewhere, eggs were hurled at the Tel Aviv City Hall building. Protestors were also said to be heading towards the Arlozorov train station.

According to police, windows were shattered in at least five bank branches. Some protestors chanted slogans slamming the ties between Israeli politicians and industrialists.

Protestors blocked one of the city's main streets, Ibn Gvirol, and later also managed to halt traffic on the southbound lanes of the Ayalon Freeway. 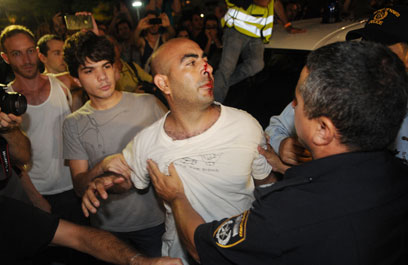 Riot police attempted to contain he riots and keep roads clear of protestors, who kept on blocking traffic. More than 20 demonstrators were held for questioning by police. At one point, detainees were forced onto a bus by officers and taken away from the scene.

Attorney Barak Cohen, who said he was beat up by police officers and broke his nose, told Ynet that "we came here to make it clear to police that freedom is ours and not theirs."

"They can use forceful means, at most. They would never be able to touch our soul, which is drenched with freedom," he said. "They can only put our body in detention."

Stav Shaffir, one of the leaders of last year's social protest, told Ynet that "while we're struggling for what we've been fighting for throughout the year, we realized there's another struggle, a great one, for democracy."

"It's embarrassing to see the State of Israel using violent means and beating up protestors," she said.

Tel Aviv District Police Commander Aharon Aksol described the events: "When we arrived at Ibn Gvirol Street that group – which I call a group of violent offenders rather that a group of social protesters – began breaking into banks. That group does not represent social protest.

"We refrained from using force and did our best to allow the protest, despite the fact that it was an illegal protest. This was done with the sole purpose of provoking the officers for the sake of rating and we will not stand for it. Every possible red line was crossed here. We will pursue this to the full extent of the law." he said.

Aksol added that the police will "Allow anyone who wants to protest to do so as long as they abide the law."

Gilad Morag and Eli Senior contributed to the report