WASHINGTON - The Iranian army is continuing to improve the accuracy and destructive power of its long-and-short-range ballistic missile force, according to a Pentagon report that was submitted to the US Congress.

The report, which was obtained by Bloomberg News, said that as part of the improvements, Iran's military is designing a maneuvering weapon to target vessels.

The June 29 report, which was signed by Defense Secretary Leon Panetta, states that Tehran "has boosted the lethality and effectiveness of existing systems by improving accuracy and developing new submunition payloads" that extend the destructive power over a broader area than a solid warhead.

According to Bloomberg, the report found that the improvements are in tandem with routine ballistic- missile training that "continues throughout the country" and the addition of "new ships and submarines." Bloomberg said the report also addresses the Islamic Republic's nuclear program and the assistance it offers to Syria, Hezbollah, Hamas and Iraqi Shiite groups. It also repeated the US assessment that Iran with "sufficient foreign assistance may be technically capable of flight-testing" an intercontinental ballistic missile by 2015. 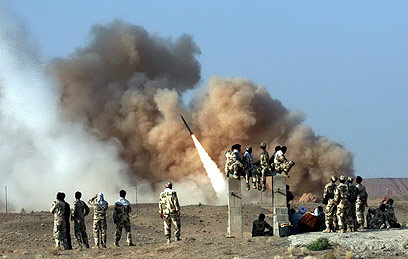 "There was a theme that Iran is improving the accuracy and lethality of its missiles," Bloomberg quoted Congressional Research Service Iran analyst Kenneth Katzman as saying.

"US government reports have previously always downplayed the accuracy and effectiveness of Iran’s missile forces," he added. Senior diplomats from the European Union and Iran are scheduled to meet on July 24 for technical talks on Tehran's disputed nuclear program to try to salvage diplomatic efforts to resolve the decade-long standoff.

The meeting in Istanbul will be the second in a series of discussions to clarify technical aspects of Tehran's activity.

It follows an agreement by Iran and six world powers in June to use such talks to decide whether diplomacy tackling broader political issues should continue in the face of vast differences in views over the nature of Iran's nuclear ambitions.

Iran, which denies its work has any military dimensions, wants international sanctions lifted before it makes any concessions, and formal recognition of a right to enrich uranium. But the six are loath to make concessions before seeing evidence of Iranian willingness to address their concerns.

New sanctions went into place in the past few weeks, with EU governments imposing an embargo on Iranian oil on July 1.

The Pentagon's report predicted that Iran "would present a formidable force while defending Iranian territory.

"We assess with high confidence" that over the past 30 years Iran "has methodically cultivated a network of sponsored terrorist surrogates capable of targeting US and Israeli interests. We suspect this activity continues," it said. The report further claimed that the Islamic Republic is continuing to develop ballistic missiles capable of reaching regional adversaries, Israel and Eastern Europe, including an extended-range Shahab-3 and a 2,000 kilometer (1,240 mile) medium-range ballistic missile. Anthony Cordesman of the Center for Strategic and International Studies in Washington was quoted by Bloomber as saying that the report appears to verify that Iran has actively deployed a new solid-fuel intermediate-range ballistic missile and that the Shahab-3 has improved accuracy and submunitions. Cordesman said the report also revealed that Tehran is looking to improve its missile counter-measures against US and Gulf Cooperation Council missile defenses and poses a potential new threat to Gulf shipping. Iran, like China, is "developing and claims to have deployed short-range ballistic missiles with seekers that enable the missile to identify and maneuver toward ships during flight," the report stated.

"This technology also may be capable of striking land-based targets," the Pentagon's report said.