US, Turkey to 'accelerate' Syria transition

This "would include the departure of (Syrian leader) Bashar Assad and be responsive to the legitimate demands of the Syrian people," the statement said.

Obama and Erdogan shared their concerns over the Syrian regime's crackdown on opposition "and the deteriorating humanitarian conditions throughout Syria as a result of the regime's atrocities." 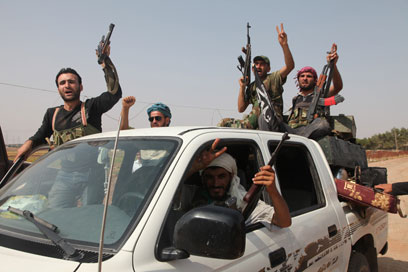 Both promised to coordinate efforts to help the growing numbers of Syrians displaced by the violence within Syria or forced to flee over the border to take refuse in Turkey or other nations in the region.

The statement said US and Turkish teams "would remain in close contact on ways that Turkey and the United States can work together to promote a democratic transition in Syria."

Ankara has become a champion of the uprising against Assad's Syrian regime and has given refuge to large numbers of army defectors, who have formed the kernel of a rebel army, as well as tens of thousands of civilian refugees.

Some 44,000 Syrians fleeing unrest in their homeland have already flooded refugee camps in Turkey, and Obama paid tribute to Turkish generosity.

Meanwhile government forces strafed rebel-held districts in Aleppo with helicopter gunships on Monday and pounded them with shelling on the third day of a pitched battle for Syria's commercial capital.

The fighting has sent some 200,000 civilians fleeing the northern city, according to the UN, which warned of a looming humanitarian catastrophe, while France said it would call an urgent UN Security Council meeting on Syria.