Op-ed: Obama, who has repeatedly broken promises and sided with Islam, will do even more damage as second-term president

"We must never force Israel to the negotiating table," presidential hopeful Barack Obama told an AIPAC conference in June 2008, and to those who were still not convinced of his commitment to the Jewish state, he added that "Jerusalem will remain the capital of Israel and it must remain undivided."

As president, Obama said the "Jerusalem promise" made by Obama the candidate was a mistake, although all signs indicate that it was not a blunder, but a blatant lie. Because a lie is created when there is no correlation between what one believes in and plans to carry out and what he writes, declares or promises.

Of course, Obama is not the first to make false promises to Israel or the US Jewish community. In 1957 Secretary of State John Foster Dulles said the US would consider the closure of the straits of Tiran by Egypt warranted Israeli military action. In 1975 President Gerald Ford said Washington would support Israel's continued sovereignty over the Golan Heights in the framework of negotiations with Syria. And there was Bill Clinton, who promised to release Jonathan Pollard in exchange for Israel's agreement to sign the Wye Accord. So, a number of American leaders have abided by the rule that promises should only be kept when it is convenient to do so.

Now, with the 2012 elections looming, when the Jewish vote and Jewish funding are as crucial as ever and Republican hopeful Mitt Romney is visiting Israel, Obama is once again stressing his "unshakeable commitment" to Israel. Earlier this week the president signed a bill calling for enhanced cooperation with Israel and announced the release of $70 million in approved funding for Israel's short-range rocket shield known as "Iron Dome."

But we mustn't forget that at the beginning of his term Obama declared that in terms of numbers the US was "one of the largest Muslim countries in the world," and, speaking to the Turkish parliament, Obama conveyed his "deep appreciation for the Islamic faith, which has done so much over the centuries to shape the world - including in my own country." The American president bowed before Saudi King Abdullah and spoke of the monarch's wisdom and generosity. He also visited Egypt, where he praised the "holy Koran," which "tells us, 'Be conscious of God and speak always the truth.'" 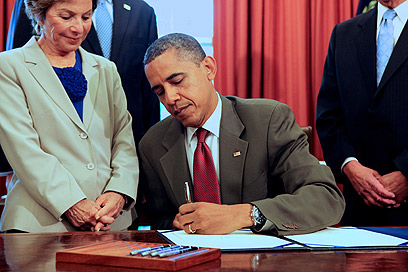 In light of these statements, it is easy to understand why Obama chose to condemn the "disaster" of expanding a balcony in Gilo and the authorization of additional construction in Ramat Shlomo, just as it easy to explain his considerable efforts to force Israel to cede all its territorial assets – including those in the heart of its capital. These declarations can also explain his decision to "shred" George W. Bush's promise to Ariel Sharon regarding the settlement blocs.

In general, Obama is becoming more Palestinian than the Palestinians by demanding that Israel halt all construction beyond the Green Line as a precondition for renewing peace talks.

Obama has also refused to fulfill the US' obligations as a superpower, such as not permitting insane thugs like Ahmadinejad to do whatever they please in the nuclear and any other field. The American leader also abandoned important allies such as Mubarak.

But as someone whose character was molded in radical liberal hotbeds such as Columbia University and Harvard, and whose political doctrine was shaped at the left wing of the Democratic Party, Obama - who also learned of the "false assumptions" underlying Western attitudes toward the Middle East from Edward Said - is merely realizing his destiny.

More than Israel, the US and the West need Romney in the White House, they need Obama out. Because as a second-term president, he may become an immortal hero of the Chinese, Russians, Islamists and the rest of those who "support" Israel and the West.