Jewish-American gymnast Aly Raisman speaks out in memory of 11 Israelis killed during 1972 Munich Games; victim's widow: I was incredibly touched

Olympic organizers stubbornly refused to hold a moment of silence for the 11 Israeli athletes killed in Munich 40 years ago, but that didn't stop Jewish-American gymnast Aly Raisman from making her own salute to the massacre victims.

Shortly after dazzling observers with a floor routine that won her a gold medal at the London Games, the 18-year-old athlete told reporters that “If there had been a moment’s silence I would have supported it and respected it."

And if that weren’t enough, she won the event with the Hebrew folk song “Hava Nagila” playing in the background, the New York Post reported. 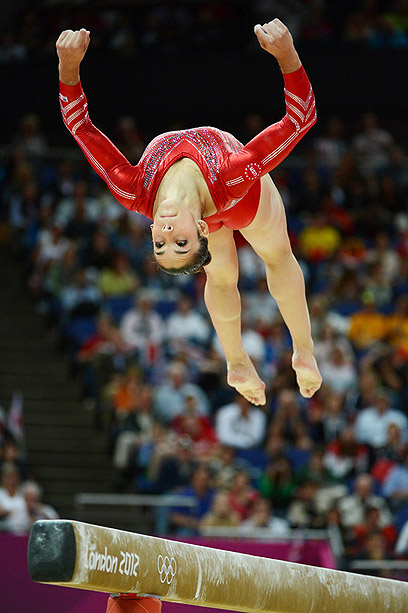 Raisman in one of her Olympic routines (Photo: MCT)
“Having that floor music wasn’t intentional,” Raisman said. “But the fact it was on the 40th anniversary is special, and winning the gold today means a lot to me.

“I am Jewish, that’s why I wanted that floor music,’’ she added.

Judges gave Raisman a score of 15.600 points for her mistake-free routine. Her top finish was the first by an American woman in the Olympic floor exercise, and the win gave Raisman her second gold medal.

'I just want to hug her'

Eleven Israeli athletes and officials and a West German Police officers were taken hostage and executed by Palestinian terrorists during the 1972 Munich Games.

Widows of the men who were gunned down in the attack said they were deeply moved by Raisman's tribute. "I was incredibly touched by Raisman's act. I just want to hug her and thank her," Ankie Spitzer, whose husband, Andre, an Israeli fencing coach, was killed in Munich. "Raisman made an extraordinary gesture in memory of our husbands," said Ilana Romano, the widow of weightlifter Yossef Romano. "Not even the athletes believe in the path chosen by the Olympic Committee." A memorial ceremony was held for the victims in London this week, but that wasn't enough to quell the outcry caused by the International Olympic Committee's refusal to hold a moment of silence during the July 27 opening ceremony. “Shame on you International Olympic Committee because you have forsaken the 11 members of your Olympic family,” Spitzer said during the ceremony.

“You are discriminating against them only because they are Israelis and Jews,” she added.