Close to 300 Russian speaking teens from around the world gathered in Israel for a two-week summer camp organized by the Jewish Agency and the Genesis Fund, Ynetnews learned.

The camp, part of an ongoing effort called Project Rimon, is focused on a commitment to instill Jewish identity within the campers and use Israel as the common denominator that unites Jews of Russian origin from diverse locales around the globe.

“This project is part of The Jewish Agency's activities to strengthen Jewish identity among the younger generation in Israel and throughout the Jewish world,” said Jewish Agency Chairman Natan Sharansky.

“The camp will provide youth from abroad with the opportunity to familiarize themselves with the State of Israel and with Israeli society, while Israeli youth will expand their familiarity with Jewish life abroad." 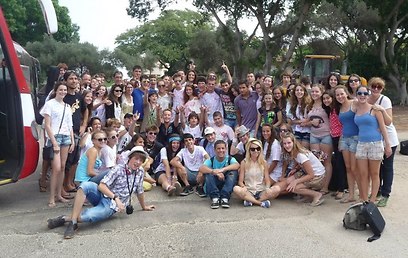 Now in its third year, Project Rimon is divided into two camp sessions, IsraCampus and Ma.Com, comprised of 140 campers each. Besides the traditional camp activities, attendees are able to choose from different tracts of focus and include options in theater, design, media, music and education among others.

A major educational goal of the Jewish Agency and Genesis Fund’s activities in the former Soviet Union, these camps help reinforce the bond Russian speaking youth have with the global Jewish community.

The program works to foster leadership and promote dialogue about Israel and Judaism among the younger generation.

“If you asked me last summer when I was a camper at Makom what ‘Shabbat’ is I would not know how to answer,” said Danik, 15, who came to camp from Russia. “When my friends ask me about Shabbat I can now talk about what it means to me and how it is part of my personal story. I now enjoy discussing my feelings about our traditions with my friends at camp and hearing everyone’s opinions on our joint heritage.“

“I am very surprised by the stories I hear from the campers that come from Russia,” said Michal, 14. “My mother has always taught me about anti-Semitism, but I was sure that these were stories from the distant past.

"It turns out that my friends from Russia have to deal with this ugly phenomena in their schools and on the streets of their towns and have to decide on a daily basis whether or not to stand up for Israel. I have so much respect for them for doing so.”

“Our goal is to create modern and attractive Jewish educational environment in Israel, the heart of the Jewish people, to unite Russian-speaking teens from Israel and around the world,” said Sana Britavsky, Executive Director of the Genesis Fund in Israel.

“We use traditional and innovative camp experiences and activities to highlight the exciting world of Jewish culture, an important instrument in the process of self-discovery and the development of Jewish identity.”