A new form of terrorist activity has recently begun to plague the Jewish communities of the West Bank. These attacks take the form of piles of several stones placed on the road during the night, with the objective of causing car accidents.

The phenomenons of stone barriers placed on the road are becoming wider spread. They are now being discovered on a weekly basis. Several cars have been damaged so far.

Last week, the latest barrier was discovered on the way to Harasha, in Benyamin, very close to the residents' homes. Four cars were damaged. Security forces searched for possible suspects. The barrier itself was removed by the residents. 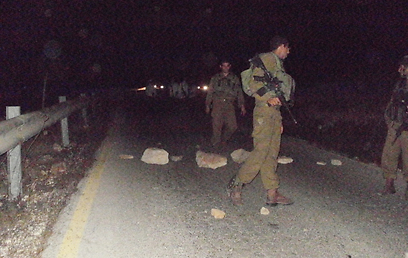 Stone barrier (Photo: Yair Shohan, Tazpit News Agency)
This attack was the last in a series which have occurred over the past months. Security officials told Tazpit News Agency that it is believed to be the work of youngsters from nearby village. No assailants have been arrested so far.

There has been a general rise in the terrorist activity against Israeli residents in the West Bank in the past months. An Arab terrorist was caught Tuesday night attempting to infiltrate the town of Ginot Shomron in central Samaria.

The Arab was caught at about 6:20 pm Tuesday evening, after several people reported seeing a suspicious looking individual crouching outside the town's security fence. 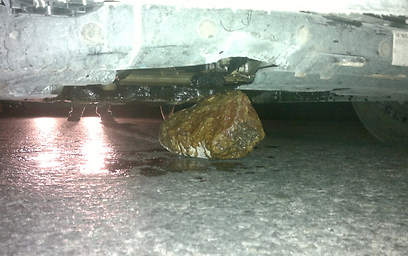 Local security forces apprehended the suspect. IDF troops arrived soon after the report was received and arrested the Arab. He was searched, and a knife and slingshot were found on his body.

Security officials believe that the Arab had planned to infiltrate the town and carry out a terrorist attack. They further believe that he planned to attack hikers in the Kana Nature Reserve, bordering the town. The suspect, a 24 year old Arab from the nearby village of Azzun, claims he was trying to hunt birds.

Ginot Shomron, a neighborhood in the town of Karnei Shomron, is located adjacent to Azzun, along Road 55. Drivers on Road 55 are subject to constant rock throwing attacks by Arabs from Azzun. During the second Intifada, three youths from Karnei Shomron were killed in February 2002 when terrorists attacked a shopping center in the town.