Friday's terror attack, which claimed the life of Corporal Netanel Yahalomi, was carried out at one of the more problematic points along the Israel-Egypt border – the steep and oblique Mount Harif region. In the original plan the new security fence was not supposed to wind through the whole region due to the high cost of flattening the land and blocking the wadis that cross it. However, when the terror threat from Sinai became more and more apparent, the government decided that the fence would run through the entire area.

For this reason, and because of the problematic terrain, the segment of the fence where Friday's attack occurred has not been completed yet. There are still a few gaps, and the terrorists from Sinai used one of them to infiltrate and surprise IDF soldiers who left their post to offer water to African infiltrators. The ensuing gunfight left Yahalomi and thee terrorists dead.
New Egypt
Morsi trying to erode peace treaty
Ron Ben-Yishai
Analysis: Egyptian president's attempts to minimize cooperation concern Israel more than deployment of tanks in Sinai
Morsi trying to erode peace treaty
It is very reasonable to assume that the terrorists belonged to a Salafist or jihadist organization that operates in Sinai and is in close contact with terror forces in Gaza. The attack may have even been an act of revenge for the killing of two terrorists from the Gaza-based Ansar Beit al-Makdas organization by the IDF three days ago. According to evidence on the ground, the terrorists were not very skilled or capable, and this strengthens the assumption that the terrorists were looking to avenge the deaths of the two jihadists in Gaza. It remains unclear whether the IDF had any intelligence information regarding the possibility of an attack in the Mount Harif area. It appears that it did not. Gaza is a safe haven for numerous Salafi groups that are inspired by global jihad. These terror groups are comprised mainly of Bedouins from Sinai. They prepare for the attacks in Gaza, where they cannot be monitored by Egyptian intelligence and heads of Bedouin clans who oppose their terrorist activity. Regardless of the terrorists' identity, it is clear that the IDF is finding it difficult to obtain intelligence information on armed terror groups in Sinai. Even when it does obtain such information, the army is having trouble using it to thwart terror attacks. The reason for this is mainly political. Israel does not want to operate in Sinai for fear that the Muslim Brotherhood would use such activity as a pretext to cancel the peace treaty's security clause, and perhaps even ignite an all-out war. These fears existed during Mubarak's era as well, but then Sinai was still more or less under the control of Egyptian security forces. Now the new regime in Cairo is failing in its efforts to govern the peninsula. Egyptian President Morsi tried, through his representatives, to negotiate a truce of sorts with the armed Salafist groups in Sinai, but the talks failed and the clashes between the terrorists and Egyptian security forces resumed. 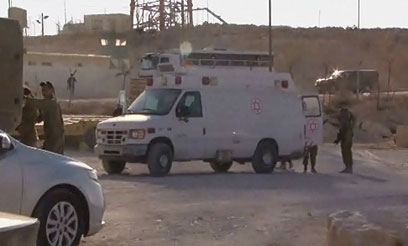 Currently the jihad and Salafi terrorists are operating freely in Sinai. Only five days ago they killed an Egyptian soldier and injured others while attacking an army base in the Al-Arish area. The terrorists, who became rich from their smuggling operations and are equipped with weapons and vehicles, are no longer under the authority of Bedouin tribal leaders. Cairo is so desperate that, according to reports, the army plans to use chemical weapons against the terrorists in central and northern Sinai.

Israel must draw a number of lessons from Friday's attack and the general situation in Sinai, the most important of which is that no line of defense can fulfill its role unless it is backed by the close monitoring of terrorist activities deep in Sinai – not just a few kilometers from the fence. The security fence alone cannot stop the terrorists. On Friday they exploited the presence of a group of African asylum seekers to attack Israeli forces, tomorrow they will drive an explosive-laden vehicle through the fence and the day after that they will think of some other ploy. Therefore, Israel must work quickly to increase its intelligence-gathering capabilities in Sinai. This is crucial in the prevention of terror and rocket attacks from Sinai. However, it is clear that Israel must think twice before operating in Sinai on its own. Such activity could give the Muslim Brotherhood an excuse to annul the peace agreement with Israel – and even Washington would have a hard time stopping them. The treaty preserves the "cold peace" between Israel and Egypt, in which there are no Egyptian forces in Sinai that directly threaten Israel and the chance of a surprise attack by Egypt is non-existent. The "cold peace" creates a situation whereby the tension between Israel and Egypt cannot degenerate into an armed conflict unless one of the sides is interested in war. Therefore, abiding by the treaty's security clause is in Israel's interest, just as much as it is in the Egyptians' interest. Moreover, if Egypt cancels the peace treaty, Jordan will not want to remain the only Arab country that has a peace agreement with the Jewish state. Israel has a strategic interest in maintaining the peace treaty in the face of the terror threat from Sinai, which, for now, is limited. But it may soon turn into a strategic threat, and in such a situation it is entirely possible that tourism and daily life in Eilat will be dealt a severe blow. In this situation, a large chunk of the Negev will essentially become a closed military zone. Friday's attack will also force the IDF to reassess its policy regarding the arrest and treatment of African infiltrators.