NEW YORK - Egyptian President Mohammed Morsi on Wednesday urged the international community to work immediately toward the establishment of an independent Palestinian state within "all the occupied territories."

In a belligerent debut speech before the UN General Assembly, Egypt's first democratically-elected president called for immediate progress that would "put an end to the colonialism and the settlements and change the identity of occupied Jerusalem."

Three months after winning the general elections as the candidate of the Muslim Brotherhood movement, Morsi told the UN, "I am the first Egyptian president who was elected in a democratic vote at the end of the revolution."

Speaking in Arabic, Morsi dedicated the first part of his speech to god, the prophet Mohammed and Islam. 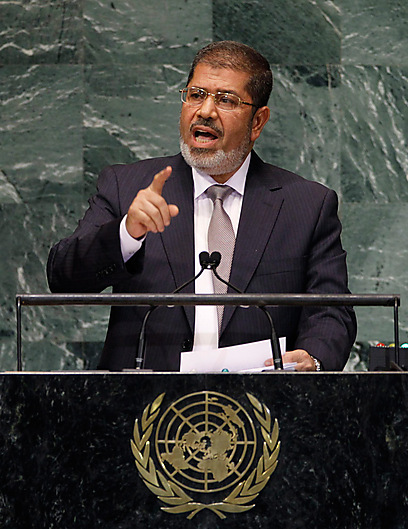 The president stressed that Egypt was committed to all the international agreements it had signed, though he did not specifically mention the 1979 peace treaty with Israel.

"The world should resolve the Palestinian issue first. A (Palestinian) state must be built with Jerusalem as its capital," he said.

"It is a shame that the world continues to ignore the rights of the Palestinians. All forms of occupation of the Arab nation must end. I promise that Egypt will support any Palestinian maneuver in the UN to obtain their legitimate right to a state."

In his speech, Morsi also called for a Middle East that is "free of nuclear weapons, without exceptions."

"Egypt is committed to pursue the sincere efforts it has been exerting to put an end to the catastrophe in Syria, within an Arab, regional and international framework," Morsi said.

"One that preserves the unity of this brotherly state, involves all factions of the Syrian people without racial, religious or sectarian discrimination and spares Syria the dangers of foreign military intervention that we oppose."

Earlier, Iranian President Mahmoud Ahmadinejad told the General Assembly that his country is under threat of military action from "uncivilized Zionists," adding that such threats from big powers are designed to force nations into submission.

"Continued threat by the uncivilized Zionists to resort to military action against our great nation is a clear example of this bitter reality," Ahmadinejad said.