Prime Minister Benjamin Netanyahu met with senior US officials on Thursday after his speech at the United Nations General Assembly in which he stressed the need to draw a red line for Iran's nuclear program.

New York Mayor Michael Bloomberg told Netanyahu that the citizens of Israel stood by New Yorkers after the September 11 attacks and stated that terrorists will never succeed in causing the people of Israel and the US to renounce their beliefs, values and way of life.

“I thought President Obama gave an excellent speech in the UN, and he was absolutely right to say that Iran must not be allowed to obtain nuclear weapons,” Bloomberg said before meeting with Netanyahu.

The New York mayor added that the prime minister made a compelling argument in explaining the need for a red line and expressed confidence that Washington and Jerusalem will shape a joint policy based on common interests. Netanyahu on his part said that it was important "at this critical time" to be clear and determined in preventing Iran from obtaining a nuclear weapon stressing this could be a turning point in history. “We’re in close consultations with the United States about this issue, about how to practically prevent Iran from moving ahead, how to make them abandon their nuclear weapons ambitions,” Netanyahu said.

"I believe this can be achieved and we shall continue to work towards this goal," he told Bloomberg. 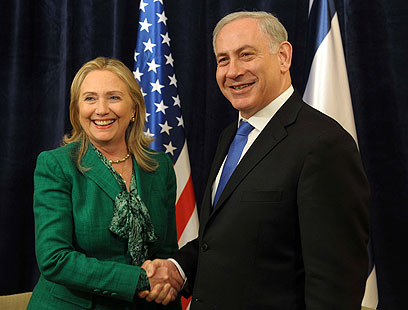 Later on Thursday, Netanyahu met with US Secretary of State Hillary. "They had an in-depth discussion on Iran, and reaffirmed that the United States and Israel share the goal of preventing Iran from acquiring a nuclear weapon," a senior State Department official said in a statement quoted by AFP.

“They agreed that we will continue our close consultation and cooperation toward achieving that goal.”

On Friday, Netanyahu is scheduled to talk to President Barack Obama over the phone.

Meanwhile, US officials expressed satisfaction with Netanyahu's speech. US Ambassador to Israel Dan Shapiro said that the prime minister's speech highlighted the fact that the US and Israel share a common goal of preventing Iran from obtaining a nuclear weapon and noted that Obama had "said the same things" at his own General Assembly speech two days earlier.

Earlier Thursday the White House stated that President Barack Obama and Prime Minister Benjamin Netanyahu share the goal of preventing Iran from acquiring a nuclear weapon and will maintain close cooperation on the issue.

But the White House stopped short of saying Obama would give any ground on his resistance to setting a "red line" on Iran's nuclear program, even after the Israeli leader hammered on the need for such an ultimatum before the UN General Assembly.