As hurricane approaches, mayor says residents who need to evacuate should do it immediately

Mayor Michael Bloomberg spoke at a news conference Saturday morning ahead of the anticipated arrival of Hurricane Irene. He says residents who have to leave the city should go right away because transit systems will shut down at noon, bridges may close and the city doesn't have enough resources to evacuate everyone after the weather worsens.

Mandatory evacuations have been ordered for 370,000 New Yorkers who live mostly in low-lying areas. The storm is expected to reach New York on Sunday.

The unprecedented orders, which affect New Yorkers from Manhattan and out to the beaches of Brooklyn and Queens, dealt the congested metropolis a formidable logistical challenge that raised more questions than it resolved:

Where are all of those people in New York's flood-prone areas supposed to go? And, more pointedly, how are they going to get there - especially since many don't own a car? 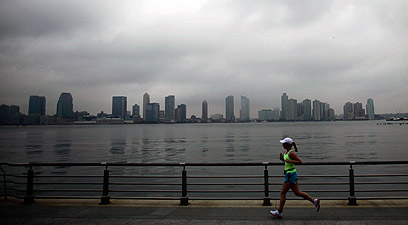 Subways, buses and trains in one of the world's largest public transportation systems were to stop running at noon. Bridges and tunnels also could be closed as the storm approaches, clogging traffic in an already congested city.

Officials hoped most residents would stay with family and friends, and for the rest the city opened nearly 100 shelters with a capacity of 71,000 people.

Bloomberg said he was confident people would get out of the storm's way.

Several New York landmarks were under the evacuation order, including the Battery Park City area, where tourists catch ferries to the Statue of Liberty. Construction was stopping throughout the city, and workers at the site of the World Trade Center were dismantling a crane and securing equipment. Bloomberg said there would be no effect on the Sept. 11 memorial opening the day after the 10th anniversary of the 2001 terrorist attacks.