For the past four months, the Nof Tzion neighborhood in eastern Jerusalem has been plagued with recurring stone attacks carried out by Arabs from the neighboring Jabel Mukaber.

The neighborhood's Jewish residents have approached the police about the issue numerous times, but the police have been unable to gain control of the situation. These attacks occur every few days, endangering the lives of the 90 families living there. In most cases, the incidents result in damage to cars or property, but last month a 10-year-old girl was wounded by stones while playing in the backyard with her friends, requiring stitches to her head.

A general increase in terrorist activity in the Jerusalem vicinity has registered recently, and the residents of Nof Tzion have not been spared. But in their case there is a direct correlation between the attacks and a new high school built in Jabel Mukaber, which is situated to the north of Nof Tzion. Students throw stones and objects towards homes and damage parked cars. 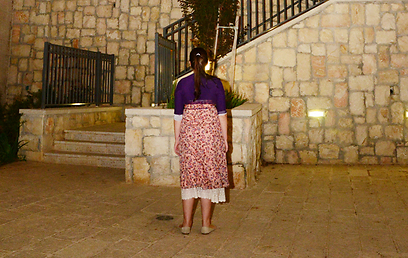 The police were notified about the phenomenon, but their response was to ask the residents to install security cameras and to join the Civil Guard. They did as they were told at a cost of thousands of shekels. The cameras documented the events, and the footage was passed on to the police. But the officers claimed they could not identify anyone from the footage, stating they could not ensure the residents' safety every moment of the day.

In a recent incident, one of the residents' car was hit, triggering rage in the neighborhood and prompting several youths to block roads in the area.

In another case, according to one resident, an Arab come to a kindergarten in the neighborhood, forcing the Jewish students out and chanting "slaughter the Jews."

The residents say they fear walking around the neighborhood, and feel they have been "abandoned by the police." The police have stated that they are working continuously to catch the culprits, adding that only four complaints have been lodged over the past four months. Reprinted with permission of the Tazpit news agency