A delegation of 10 senior counter-terrorism experts from the police departments of New York City, Los Angeles, Houston, Austin, Oakland and Montgomery County (MD) are visiting Israel (Oct 13-20, 2012) through Project Interchange, an educational institute of AJC. The week-long educational program will showcase Israeli technological and operational advances in counter-terrorism tactics. Additionally, it will offer the group of assistant chiefs, commanders, captains, and senior analysts an opportunity to exchange information on best practices with their Israeli counterparts.

On the agenda are discussions on countering the financing of terror operations and organizations, cutting-edge counter-terrorism technologies, airport security and profiling, with visits to the Border Guard unit and Megido Prison. Several sessions throughout the week also address broader strategic issues, including Israel’s reaction to homegrown terrorism, security cooperation by the Israeli and Palestinian Authority defense forces, Israeli and Palestinian politics and society and the peace process.

Commander Richard Webb of the Los Angeles Police Department said, "The Israelis are considered world leaders and innovators in counter terrorism and security. My experiences in meeting with the various experts and leaders confirm they not only are experts, they are pragmatic and collaborative. Equally as important they do their duties while vigilantly protecting human rights. I will take many lessons I learned back to Los Angeles. I observed several new techniques for security operations including multilevel security measures at an international airport." 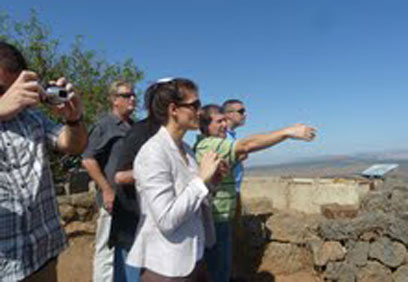 Assistant Chief Russell E. Hamill of the Montgomery County Police Department, said, "This has been some of the most meaningful training I've ever attended. It has demonstrated not only the importance of hardening the country against terror attacks but also of the community in refusing to be terrorized. The Israeli people live that; they refuse to be terrorized. In the battle against terrorism, that's how you win and the Israelis are winning. They are not victims but survivors."

According to Captain Brian K. Coyne of the New York Police Department, the Palestinian police chief (responsible for coordination between Palestinian Civil Police and the Israel Police) "was really frank in telling us how people live and the issues they deal with. It's amazing how people in Israel live with all these issues going on."

"Countering violent extremist groups requires ongoing collaboration and information sharing and we do this by offering participants exposure to Israeli technological advances and operational tactics, and helping to establish collaborative ties between responsible law enforcement agencies worldwide," he said.