Videos of strikes carried out by Syrian air force in north of country show leveled buildings, survivors pulling bodies from the debris; rights groups says at least 28,000 people have disappeared after being abducted by soldiers or militia

Syrian activists said a string of government airstrikes on rebel areas in the country's north has killed at least 44 people, leveled buildings and forced residents to dig through mounds of rubble in search of survivors.

At least 30 people are missing, the activists reported.

The activists said the strikes happened late Wednesday and early Thursday and hit a total of four towns in Idlib and Aleppo provinces.

Al-Jazeera reported that at least 100 people were killed in clashes across the country.

The activists said residents are searching through the rubble in some of the towns, while in others the dead were buried before being identified. Videos of the strikes posted online show leveled buildings and survivors pulling bodies from the debris.

Activist claims and videos could not be independently verified.

President Bashar Assad's forces have increasingly relied on air power as the rebels have improved their fighting capabilities on the ground. The rebels tried to shoot down some of the planes, but without any success.

Fighter jets began overflying and bombarding Maaret al-Numan, located on the main Damascus-Aleppo highway, in the early hours of the morning, targeting the strategic town and its periphery.

In addition to the aerial strikes, the town was hit with artillery fire and rockets. At least two children were among the victims. Searching through the rubble in Maaret al-Numan. (Photo: AFP)

The bombing raids were punctuated by artillery and occasional rocket fire across the town, although these were less intense than witnessed over the past week.

Overnight, sporadic gunfire was also heard, including around a major military base at Wadi Deif, where the insurgents kept up a siege of about 250 troops holed up inside.

Syria's state news agency says rebels have blown up two oil and gas pipelines in the northeast near the Iraqi border.

The agency, SANA, says the attack hit one oil and one gas pipeline Thursday near the city of Deir al-Zour. The pipelines ran between Deir al-Zour and the city of Palmyra in central Syria. Anti-regime activists posted a video online purporting to show the blast site, with thick smoke billowing into the sky. The video could not be independently verified. SANA quoted an oil ministry official saying the lines were immediately shut off, the fires were extinguished and repairs would begin soon. 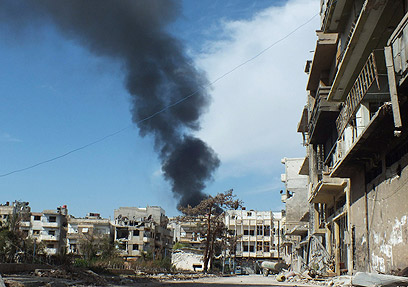 Meanwhile, human rights groups working in Syria said at least 28,000 people have disappeared after being abducted by soldiers or militia, the BBC reported Thursday.

They said they have the names of 18,000 people missing since anti-government protests began 18 months ago and know of another 10,000 cases.

Online activist group Avaaz was quoted as saying that "nobody is safe" from a deliberate government campaign of terror.

The UN said more than 18,000 people have been killed in the conflict with 170,000 fleeing abroad and 2.5 million in need of aid within the country. Opposition and human rights activists put the death toll at more than 30,000.

Also on Thursday, the UN refugee agency said the number of Syrian refugees who have fled their country’s civil war to find shelter in Egypt has now topped 150,000 — a significant jump from last month’s figure of 95,000.

UNHCR’s Mohamed Dayri said that despite the "increasing spillover" into Egypt, only 4,800 Syrians have registered with the refugee agency in Cairo. He called on Egypt to help the agency deal with the "rising emergency" of Syrian refugees here. Another UN official in Cairo, speaking on condition of anonymity because he wasn’t authorized to talk to the media, suggests Syria’s neighboring countries are “reaching saturation point” with refugees there, prompting an influx into Egypt, where living is cheaper. The official said many Syrians live off their savings instead of registering with the UN.