President says jobs report proves his policies over last four years have put US on road to recovery, while Republican candidate claims it is a 'sad reminder that the economy is at a virtual standstill'; polls show Obama holds a slight lead in majority of battleground states

President Barack Obama accused Mitt Romney of scaring voters with lies while the Republican challenger warned of political paralysis and another recession if Obama reclaims the White House on Tuesday. A highly anticipated economic report failed to jolt the fiercely close race.

Obama and Romney both tried to seize on the monthly jobs report released Friday to energize their bases and sway the few undecided voters still out there. The numbers held something for both candidates, showing the monthly unemployment rate ticked up slightly but created far more jobs than expected. Obama argued the report proved his policies over the last four years have put the US on the road to recovery. The Democratic incumbent warned voters that a Romney presidency would resurrect the policies that got the US into financial trouble in the first place under Republican predecessor George W. Bush.

Romney called the report a "sad reminder that the economy is at a virtual standstill" and warned grimly of political paralysis and another recession if Obama reclaims the White House.

He said an Obama presidency would mean more broken relations with Congress, showdowns over government shutdowns, a chilling effect on the economy and perhaps "another recession." "He has never led, never worked across the aisle, never truly understood how jobs are created in the economy," said Romney, a former private equity firm executive, in a campaign stop in Wisconsin. 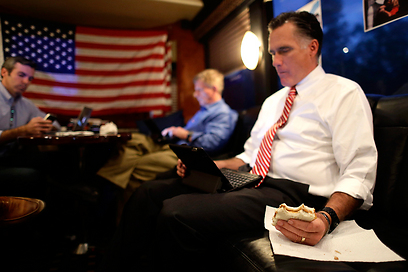 Obama personally assailed Romney over ads suggesting that automakers General Motors and Chrysler are adding jobs in China at the expense of auto-industry dependent Ohio. Both companies have called the ads untrue. The matter is sensitive in Ohio, perhaps the linchpin state of the election.

"I know we're close to an election, but this isn't a game," Obama said from Hilliard, Ohio, a heavily Republican suburb of capital Columbus. "These are people's jobs. These are people's lives. ... You don't scare hardworking Americans just to scare up some votes."

Obama will face voters with the highest unemployment rate of any incumbent since Franklin Roosevelt during the Great Depression of the 1930s.

The government report showed the United States added a solid 171,000 jobs in October, and more than a half-million Americans joined the workforce, the latest signs that the uneven economic recovery is gaining strength once again. But the unemployment rate inched up to 7.9% because not all those joining the workforce found work. It was the final snapshot of the economy before the election Tuesday. "We've made real progress," Obama told a crowd in Ohio shortly after the report. "But we've got more work to do." While the politically neutral report was unlikely to affect the election outcome, it brought the economy back into the national conversation in a country still preoccupied with the devastation wrought by Superstorm Sandy on the US East Coast. Obama paused his campaigning for three days this week to manage the natural disaster. Romney muted criticism of the president during those days for fear of appearing to seek political advantage while Americans were suffering, and his campaign watched awkwardly as a once-prominent Obama critic, New Jersey's Republican Gov. Chris Christie, praised the president and toured storm damage with him. 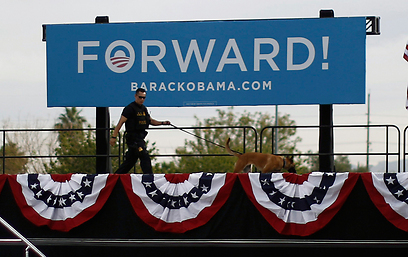 Friday's report came after other signs that the economy is on the mend. Most important, consumer confidence is up to its highest level since February of 2008, according to the Conference Board.

Obama, who responded to recession with a roughly $800 billion stimulus plan and expanded the auto industry bailout begun under Bush, wants to raise taxes on the wealthy and ensure they pay 30 percent of their income at minimum. To create jobs, he would push to steer money toward energy development, education and worker training, manufacturing support and infrastructure. Romney firmly opposes raising taxes on families. He has pledged to keep Bush-era tax cuts for all incomes and drop all tax rates further. He also promises to cut $500 billion per year from the federal budget by 2016, although he has been under pressure to explain how he will accomplish that while also lowering taxes. Romney pledges to curtail deductions, credits and exemptions for the wealthiest, but he has not provided specifics. Polling shows the race remains a legitimate toss-up heading into the final days, but Obama holds a slight lead in a majority of the battleground states where the outcome of the vote is likely to be determined. Under the US system, the nationwide popular vote does not determine the winner. Romney and Obama are actually competing to win at least 270 electoral votes in state-by-state contests. Those electoral votes are apportioned to states based on a mix of population and representation in Congress. Romney has the tougher path to victory because he must win more of the nine most-contested states to reach 270 electoral votes: Ohio, Florida, Virginia, North Carolina, Colorado, Nevada, Wisconsin, Iowa and New Hampshire. In a late, concerted effort to change that landscape, the former Massachusetts governor was making a push into Pennsylvania, a state that has been considered solid Democratic territory and that Obama won comfortably in 2008. Romney's foray into Pennsylvania is not folly. Unlike states that emphasize early voting, Pennsylvania will see most votes cast on Election Day. The state has not been saturated with political advertising, giving Romney and his supporting groups - still flush with cash - an opportunity to sway last-minute voters with a barrage of commercials. Obama is countering by buying commercial time in the state as well and is sending former President Bill Clinton into the state to campaign. Romney appeared intent on another path to the presidency should he lose Ohio, perhaps the linchpin state of the election. No Republican presidential candidate has ever won the White House without winning Ohio.