Did Prime Minister Benjamin Netanyahu and Defense Minister Ehud Barak try to drag Israel into a military operation in Iran without cabinet approval?

Channel's 2 investigative program Uvda is set to expose on Monday evening a dramatic exchange between Netanyahu and Barak and then IDF chief of Staff Gabi Ashkenazi  and Mossad director Meir Dagan, Yedioth Ahronoth reported. The exchange took place after a meeting of the seven top ministers in 2010.

Just as the two were about to leave the room, Netanyahu ordered them to prepare the defense establishment for the possibility of a strike using the code word "P. Plus."

Utterly shocked, the two expressed strong opposition to the order. "It’s not something you do if you're not sure you want to follow through with," Ashkenazi said.

Sources close to the former IDF chief said that the very act of preparing the defense establishment for a strike even without immediate deployment would create facts on the ground which could lead to war. 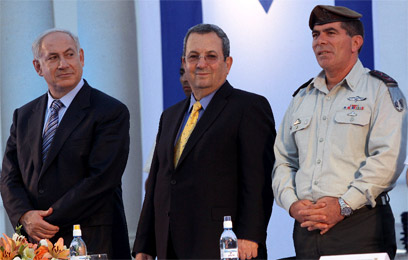 Dagan, according to some of those present in the meeting, took an even tougher tone. "You might be making an illegal decision about going to war," he charged. "Only the cabinet is authorized to decide this." Later Dagan explained that "the prime minister and defense minister were trying to hijack a war."

Barak himself noted that the rest of the meeting was no less dramatic. He told Uvda's Ilana Dayan that Ashkenazi responded by saying that the order cannot be carried out as the IDF lacked the necessary operational capability.

It should be noted that it is unclear whether the army did or did not have the operational capability to mount an attack at that time but as far as Barak is concerned the IDF chief had failed by not preparing the army for a possible attack.

Ashkenazi is outraged by this assertion. "Barak is not speaking the truth," he said in closed talks. "I prepared the option, the army was ready for a strike but I also said that a strike now would be a strategic mistake."

Barak on his part claimed in the interview that the order did not necessarily mean war. He nevertheless stressed that "What you are describing now is under the government's responsibility. The thought that if the IDF chief of staff does not recommend something that is within our capabilities then it should not be done is wrong.

"A chief of staff needs to build operational capability, he needs to tell us professionally whether something is doable or not and he can and even should offer his own recommendation, but it can be done against his recommendation."

Former Prime Minister Ehud Olmert, who was also interviewed, slammed Barak for telling senior IDF officers that "with such general staff we would not have won the Six Day War."

"If Barak said this – it's intolerable. I think it's a threat that prevents the military establishment from being able to speak candidly."

Olmert also fiercely slammed Netanyahu. "Why do we need to pick fights with the entire world? What is this talk of us deciding our destiny by ourselves and not taking into consideration anyone else's opinion?

"Someone please tell me what jets would we use if we decide to attack alone and against everyone's advice. What bombs would we use? Ones that we made or those we received from others? And if we need something, who would we ask? The person whom we spit upon? The person who we're doing everything to prevent from becoming the president of the United States?"