WASHINGTON - Prime Minister Benjamin Netanyahu gave private assurances to US President Barack Obama on Friday evening that Israel was not planning at that moment to launch a ground offensive in Gaza, The Daily Beast news website reported.

According to the report, which was published early on Sunday, Netanyahu told Obama that those plans would change if Hamas escalated its rocket war.

According to two American officials who were briefed on the phone conversation between Netanyahu and Obama, the PM said Israel would not consider a full-scale ground invasion of Gaza unless there was escalation from Hamas or an attack that caused significant casualties.

The officials were quoted by The Daily Beast as saying there has not been, for example, a date set for such an invasion—nor are the other kinds of contingency plans Israel would need in such a circumstance in place. 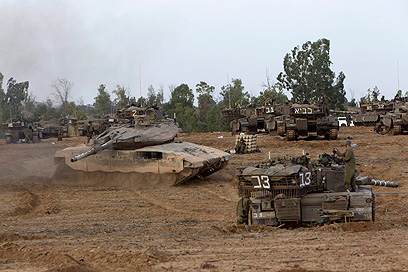 "The Israeli leadership at this point is leaning against a ground invasion. No one wants that. If Hamas ratchets up the pressure, however, they may elect to do so," a senior US official told The Daily Beast.

An American intelligence official told the website that conversations between Netanyahu and Obama are noticeably different than their discussions on Iran, in which Netanyahu pointedly declined to give Obama assurances that Israel would not unilaterally strike Iran's nuclear installations.

Israel’s ambassador to Washington, Michael Oren, did not comment on Netanyahu’s call with Obama, but he did say the prospect of an invasion had not been ruled out.

"If they keep shooting at 5.5 million Israelis at the current rate we will have no choice but to use all necessary and legitimate means to defend our citizens and that includes possible ground action," Oren told The Daily Beast.