Op-ed: Only one who can claim victory after latest round of Israel-Hamas fighting is Morsi

The ceasefire negotiations in Cairo were multinational. There was Hamas and the new Islamist regime in Egypt. And behind Egypt there was Turkey and Qatar. And in the background there were the highest-ranking American officials: President Obama, with the phone calls to Morsi, and Secretary of State Clinton. Opposite them was Mossad chief Tamir Pardo, who is a partner of the Egyptian intelligence heads, and behind him there was Prime Minister Netanyahu.

Such an honor has never been bestowed on Hamas before, not even during the days of the negotiations for Shalit's release. When Hamas will analyze the gains and losses of the latest round of violence, international recognition of the organization and its needs will be high on the list of gains. Diplomatically, Hamas came out stronger from this round of fighting; the IDF admits to this. The question is whether this is good or bad for Israel.
Pillar of Defense
Only time will tell
Ron Ben-Yishai
Analysis: There is a good chance that Operation Pillar of Defense will improve security, reducing missile threat on southern and central Israel
Only time will tell
Negotiations were conducted, but there was no agreement. Apparently, there won’t be an agreement. Israel agreed to launch talks with the Egyptians - within an unspecified period of time – during which Hamas' needs and demands will be discussed. If the ceasefire holds, Israel will have to soften its policy vis-à-vis the border crossings and allow, among other things, the transfer of goods into Gaza that are currently banned. The siege will be softened. Whatever is lifted can always be tightened again. Egypt will continue to play the role of mediator between Israel and Hamas in the future. The change is in the relations between the Egyptian regime and Hamas. The late Omar Suleiman, who was the head of Egyptian intelligence, used to curse the Hamas leaders in Gaza during his meetings with Israeli officials. He rejoiced in every blow Israel would inflict on Hamas. Mubarak was even happier. He would publicly condemn Israel's military actions and then encourage the Israelis, in closed meetings, to continue pounding Hamas. But this is all over now. The operation in Gaza was the first test of the relations between the new regime in Egypt and Israel. There is no intimacy, and there won’t be any either. There are no mutual winks. The Netanyahu government and the Morsi government – facing each other as well as the American administration - are maneuvering cautiously. The US administration has formulated a Mideast strategy that attempts to deal with the results of the Arab Spring. The current goal is to build a Sunni axis that will stand against the radical Shiite axis headed by Iran. The issue is Syria, not Hamas. America wants to use these countries to overthrow Assad's regime and, most importantly, make certain that after he is gone Syria will not fall into the hands of jihadist elements similar to those that have begun to appear in Sinai. 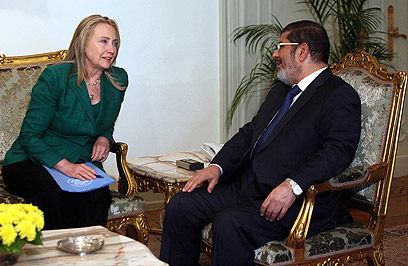 Turkey is the senior-most partner in the Sunni axis, along with Egypt. Saudi Arabia, the Gulf States, Jordan and the Palestinian Authority are welcome to join them. Hamas is also meant to be part of this axis. Hamas has been moving away from Iran since the revolution in Egypt. The Gaza operation expedited this process. From this point forward Iran will base its hold on Gaza on Islamic Jihad, which is fully-funded by Tehran. Who will provide Hamas with rockets to replace those it lost during the operation? This remains unclear. The nature of Hamas' relations with Islamic Jihad in the aftermath of the fighting is also unclear, as is Egypt's reaction to these relations.

Some Israeli officials believed that the negotiations on a ceasefire should be conducted without Egypt's participation. The Egyptians can no longer be fair mediators – they are Hamas' brothers, the officials claimed. But the claim that by leaving Egypt out of the talks we would be pushing its government into Hamas' arms prevailed. Demonstrations would be held in the squares, and Turkey and Qatar would follow suit. Morsi is the only one who can claim victory at this point. He established his position as a regional player and a partner of the US administration. He improved his chances of receiving billions from the West. Despite the fact that it has become Hamas' sponsor, does not recognize Israel and refuses to speak with its government, Egypt will not risk a confrontation with Israel's friends in Washington. The pro-Israel lobby will not touch him. This leaves us with Turkey. Israel has a clear interest in rehabilitating its relations with Ankara – the sooner the better. This is important for Israel's relations with Cairo and Washington. There are several Turkish government officials who are interested in improving relations as well. They regularly send messages to their Israeli counterparts.

A draft of the agreement exists. The Israeli attorney who represented the Israeli government formulated it with his Turkish counterpart. Netanyahu planned on signing it. An official in his office said that at the last moment the prime minister was shown a poll indicating that the vast majority of the public is against an Israeli apology. Netanyahu refused to sign.