The Taliban Wednesday likened the planned withdrawal of US forces from Afghanistan to America's pullout from Vietnam, calling it a "declare victory and run" strategy.

A statement from the terrorist group said the ongoing transfer of security operations from US troops to Afghan forces was merely a retreat similar to the American withdrawal from South Vietnam prior to the communist victory there in 1975.

American-led NATO troops are scheduled to pull out of Afghanistan by the end of 2014, although the US will leave a residual force behind and other NATO countries have pledged continuing support of the Kabul government.

"They want to flee from Afghanistan just as they turned tail and ran from Vietnam," the Taliban statement said. "When America faced utter destruction in Vietnam, they came up with the formula `declare victory and run' and want to utilize the formula of `transfer security and run' here in Afghanistan." 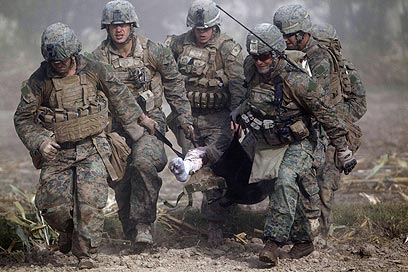 The United States withdrew is combat troops from South Vietnam in 1973, leaving South Vietnamese forces to face the North Vietnamese and Viet Cong who marched into the capital, Saigon, two years later.

The Vietnam War is considered to be a major part of the Cold War between the US and the Soviet Union, which supported North Vietnam. According to some estimates, 185 to 225 thousand Vietnamese were killed in the war, and about 58 thousand American soldiers. The US's involvement in Vietnam led to a wave of protest in the American public, which was manifest in demonstrations and draft evasion.