Interior Minister Eli Yishai announced that Shas is willing to compromise on the universal draft issue: "We'll do everything to find a golden mean to prevent a rift. Nevertheless, we'll not join the coalition for every price. If there's no choice we'll sit in the opposition and do our job from there."

Deri cautioned against a secular-only government under Benjamin Netanyahu: "Such a coalition will be made by the middle-class and above, by those who have, by the Tel Aviv state and not by development towns and the slums. These are under our responsibility."

He referred to Yair Lapid's outline on universal draft and attacked intentions to enlist haredim by force of law. 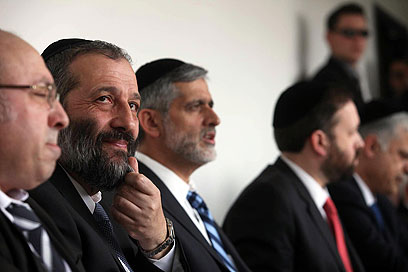 "We already said we're willing to accept extreme compromises, but not in order to go into government.

We have no problem with being in the opposition and we've been there before, but we care for public unity," Deri said.

"We care that the major cuts, the equal share of the burden and keeping the Jewish character of the State will be reached by dialogue and not by coercion.

"I'm afraid our outreached hand is not answered by certain factions," he said, hinting at Yesh Atid party members who said they stand by their original outline.

Deri dismissed the general draft notion: "Everyone knows it will not bring one person to enlist. A real draft will be made only by consent and everyone knows it."

Yishai supported Deri and explained that the percent of haredim who wish to enlist is currently larger than the enlistment extent.

"Now they want to ruin everything under pretense of equality. But there was never a danger of a rift in the people like today. Many are waiting to enlist but are not drafted," he said.

"I suggest no one consider tearing the students away from their Torahs. It will lead to a rift in the nation, Netanyahu said the same."

Shas' third leader, Ariel Atias, said that "Many feel, and so do I, that maybe the elected prime minister will be Yair Lapid. But they (Yesh Atid) will not bring more haredim to the army. They want to close down the