Op-ed: As far as PA is concerned, any moderate Israeli FM would be 100 times better than Lieberman

The easiest thing to do is to recite "Abbas is not a partner" and talk about his interview over the weekend with a restless Lebanese interviewer who did all he could to get an anti-Israel headline out of the Palestinian leader. But we mustn't forget: Abbas is our closest neighbor, only 10 kilometers away from the Prime Minister's Office in Jerusalem. That doesn't make him "one of our own;" he will always remain on the other side.

In the promo for the interview it was promised that Abbas has gone back to being a Holocaust denier. The interviewer, a close confidante of Hezbollah leader Hassan Nasrallah, pressed Abbas over the right of return issue and complained that Abbas found something in common between the Israelis and Palestinians. He also criticized the Palestinian president for his willingness to think of the Israelis "in a positive way" and asked Abbas what made him sound so content and optimistic.
Universal Draft
Lapid, prevent civil war
Ohad Shaked
Op-ed: In open letter to Yesh Atid leader, haredi teacher warns of universal draft's dangers
Lapid, prevent civil war
The interview succeeded in getting Abbas to say that Avigdor Lieberman "sent threats – that I should be terminated" and that Moshe Ya'alon "declared in an interview with an Arab newspaper that I should be removed because there is no difference between me and Hamas." If the interview is any indication, Abbas is taking all the insults hurled at him by Israeli politicians very seriously: He's not a partner, but a lame duck; a lying, irrelevant peace process refusenik. Those who killed Arafat can also get to me, he says in front of the cameras. I sat and watched the interview yesterday. Two whole hours of Abbas. From afar he looks like a neighborhood grandfather who tells stories. Up close, he is a wily fox who learned to tread carefully, as if on broken egg shells, without slipping or stumbling. Every sentence is calculated; his main goal is to return safely to Ramallah. 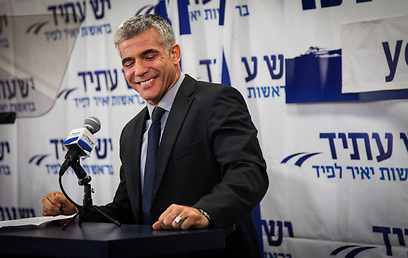 These are some of the new messages Abbas conveyed during the interview: As opposed to the grim forecasts in Israel, there are no Palestinian preparations for a third intifada. All the Palestinian factions, including Hamas, Abbas revealed, agreed during closed talks in Cairo that the struggle against Israel and the occupation would be conducted only through diplomatic channels. Khaled Mashaal threatens? It is because Hamas is also holding elections. Whoever is more extreme will win. And those who deposed Mubarak and got Morsi should learn which Palestinian is good for the Israelis.

As for the Palestinian refugee problem (according to Abbas' count there are five million of them), the refugees are no longer satisfied with the prospect of being allowed to return or receive financial compensation. Now they are seeking both: Authorization to return plus compensation for the property they left behind. You do not have to be an expert to understand which country they are dreaming of returning to. From the look on Abbas' face one could tell that he also realizes the new demands will leave the refugee issue in the garbage bin of history.

Officials in President Abbas' bureau are already looking for Yesh Atid's phone number in order to invite Yair Lapid to the Muqata. Two of the veteran Palestinian negotiators certainly want to see Lapid take the Foreign Ministry portfolio, "because anyone would be a hundred times better than Lieberman."

There is also a possibility that Lapid will become interior minister and former Shin Bet Director Yaakov Peri, no. 5 on Yesh Atid's Knesset roster, will head the Foreign Ministry. This is what they are saying in Ramallah: "Peri knows us very well; he has headed one or two projects in the past, and his diplomatic mind is in the right place."