Syria continues to insist that Israel attacked a "research center" on its soil, despite Western and Mideast diplomats' claims that the alleged airstrike targeted a shipment of SA-17 missiles bound for Hezbollah in Lebanon. The war-torn Arab country further claims that the "attack" on the research center was aimed at testing its aerial defense systems, the Al Quds Al Arabi reported Thursday, citing Syrian sources.

The sources told the pan-Arab newspaper that since the "attack" numerous air-defense battalions - particularly those deployed in the area between Damascus and the Lebanese border – are on high alert.

"Israel knows that a strike on a scientific research center that belongs to the military cannot cause damage, and that the production of Syrian weapons will continue at the site," one of the sources said.

"Israel has other goals. One of them is to test Damascus' defense and rocket capabilities." However, the source added, "the Syrian Army will not provide Israel with an answer on this matter so easily." 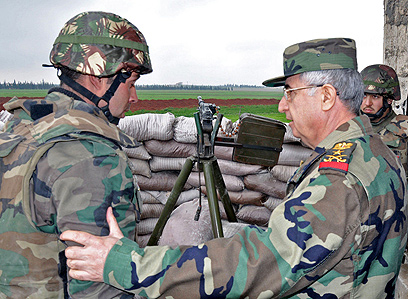 The sources repeated the claim that the alleged Israeli air strike targeted a research facility near Damascus, but insisted the attack did not damage underground military labs at the site.

Meanwhile, McClatchy Newspapers quoted two Israeli intelligence officials as saying that the anti-aircraft missiles said to be the target of the airstrike week were on a military base outside Damascus and had yet to reach the highway that leads to Lebanon when they were destroyed.

According to the sources, only administrative structures were hit. They estimated that the fighter jets did not fly directly over the target, but bombed it from afar immediately after penetrating Syria's airspace. Earlier, the White House warned Syria not to transfer weapons to Hezbollah, thus supporting the reports claiming the target of the air strike was a weapons convoy that was heading to Lebanon.

The official Syrian Arab News Agency reported Thursday that Defense Minister Fahd al-Freij briefed the Cabinet on the nature of the "terrorist attack by the warplanes of the Israeli enemy" at dawn on Wednesday.

According to the report, al-Freij said that the "heinous attack" caused damage to the research center, claimed the lives of two "martyrs" and wounded five others.

The minister, SANA reported, linked between the attack and the "aggressions of the armed groups, denying allegations of the Israeli foe that the reason of its raid was striking equipment and weapons prepared to be transformed to another place."

Ynet's military analyst Ron Ben-Yishai said Syria's version is apparently meant to conceal the fact that, according to foreign reports, Syria transferred to Hezbollah advanced surface-to-air missiles it had recently received from Russia.

The complex allegedly attacked is located 15 kilometers from the border with Lebanon, and it is safe to assume that the actual attack targeted the weapons convoy as it was passing nearby.

On Wednesday Syrian rebels said President Bashar Assad's government was lying and that they were behind the attack on the research center. This is entirely possible.

The chief of staff of the Syrian Army, Gen. Ali Abdullah Ayub, toured various army units on Thursday and assessed the preparedness of troops on the ground. Ayub spoke to the soldiers and said "we will not abandon our posts, even if the enemy will attempt aggressive actions."

"Anyone who thinks he can test our armed forces is wrong. The battle with the Zionist enemy continues, and will never end," he said.

According to Ben-Yishai, Syria and Russia have an interest in denying the attack on the convoy because Moscow recently guaranteed Israel that the advanced weapons it sells to Syria – particularly anti-aircraft systems - would not reach Hezbollah.

Assad, for his part, does not want the Russians to know he breached his agreement with them by transferring arms to Hezbollah. Moscow also fears the attack would open the door to additional attacks on Syria – this time by NATO forces.

The question is whether the attack will deter Syria and Hezbollah and stop the transfer of arms to Lebanon. Meanwhile, Jerusalem has instructed its missions abroad to raise their level of alertness. However, at this point security around Israeli interests overseas will not be boosted.