Officials say US president, who did not visit Jewish state during first term in office, was promised he would be able to advance peace process during March visit. White House: Opportunity to discuss broad range of issues of mutual concern, including Iran and Syria

The White House said Prime Minister Benjamin Netanyahu and Obama discussed the visit during a phone conversation held six days after the elections for the 19th Knesset. Channel 10 said Obama will arrive in Israel on March 20.

Obama's last visited Israel as a senator and presidential candidate in July 2008.

Israeli officials confirmed that the US leader is due to visit in the spring. The White House did not give a specific date.

According to Channel 10, prior to his arrival in Israel Obama will visit Saudi Arabia, Turkey, Egypt and Jordan.

The White House official said, "The start of the president's second term and the formation of a new Israeli government offer the opportunity to reaffirm the deep and enduring bonds between the United States and Israel and to discuss the way forward on a broad range of issues of mutual concern, including Iran and Syria." 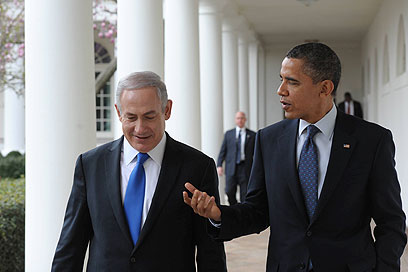 According to Channel 10, Obama was promised that during his visit he will be able "to accomplish great things" vis-à-vis the stalled peace negotiations between Israel and the Palestinians.

The report said CIA teams are already in Israel to coordinate the security aspects of the three-day visit. Obama is also expected to visit Ramallah as a guest of the Palestinian Authority.

Prime Minister Netanyahu has often hinted about a possible attack on Iran's nuclear facilities to keep it from attaining nuclear weapons. That has put him at odds with Obama and some of his own top security officials. Netanyahu has said Israel cannot rely on others when it comes to protecting its own national security.

Israel considers a nuclear-armed Iran to be an existential threat, citing calls by Iranian leaders for Israel's destruction, its development of missiles capable of striking the Jewish state and its support for militant groups hostile to Israel.

"President Obama was wise enough to establish a wide coalition aided at preventing Iran from going nuclear. This coalition began with diplomatic pressure and economic sanctions and made it clear that it does not rule out other options on the table," he said before parliament. "The United States is the country able to put an end to the Iranian threat, and I believe the president of the United States is determined to do so."

Peres has picked Netanyahu to form a new coalition government following the Jan. 22 election in which his Likud Party lost support but still remained the largest party in the 120-seat parliament. Negotiations to form a new government could take weeks.