Meretz leader Gal-On tells Netanyahu Leftist party will sit in opposition but will back any measures that 'advance peace and social justice.' PM set to meet Bennett early next week as part of coalition negotiations

Prime Minister Benjamin Netanyahu is continuing his round of talks with party leaders, even with those who do not intend to joint his next government. On Thursday he met with Meretz Chairwoman Zahava Gal-On, who clarified that her party will sit in the opposition, "but will not be an opposition to peace and social justice."

During the meeting, held at the Kirya government complex in Tel Aviv, Netanyahu said he would have to form "three separate coalitions" to deal with the main issues his government will address: The peace process, equal share of the burden and Israel's socioeconomic woes.

Gal-On, for her part, reiterated her election campaign promise to sit in the coalition, but said her Leftist party would "not be an opposition to peace and measures that will promote social justice." Netanyahu said in response, "Never say 'never'; you never know." But Gal-On replied: "In this case I know for certain."

During the meeting Gal-On mentioned US President Barack Obama's scheduled visit to Israel and said it may be aimed at influencing the make-up of the next coalition. Netanyahu rejected the claim, saying Obama wants to visit the region because he is concerned about the developments in Syria and in the Middle East in general, not because he wants to intervene in Israel's political process. The Meretz leader urged Netanyahu to form a coalition that will advance the peace process and adopt the Saudi peace initiative, which was approved by the Arab League. 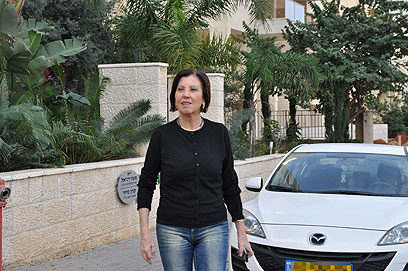 "Netanyahu should be the first prime minister to adopt the Saudi peace plan," she said, adding "just yesterday, the Saudi crown prince said the (peace) plan was still on the table and that it serves as the basis for any diplomatic initiative."

Gal-On further claimed that members of Likud-Yisrael Beiteinu were opposed to the two-state solution, but the PM told her "I am committed to the Bar-Ilan speech." Netanyahu is expected to meet with Habayit Hayehud Chairman Naftali Bennett early next week as part of the coalition negotiations. The two will discuss Habayit Hayehudi's terms for joining a Netanyahu-led government. Netanyahu met with Yesh Atid Chairman Yair Lapid on Thursday in an attempt to convince him to further pursue the inclusion of the religious parties in the coalition, which would require a compromise on the haredi draft – one of Yesh Atid's key platform points. 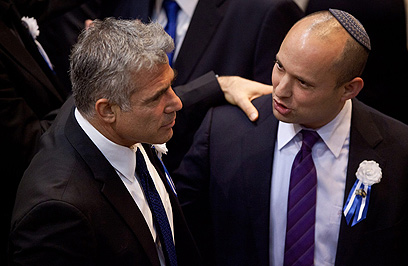 Netanyahu was expected to push for a compromise on the issue of the equal distribution of the social burden, suggesting that Lapid create a new blueprint that will better reflect the results of the elections.

A source involved in negotiations between the two said that Netanyahu intends to establish a broad  government, including Lapid, Naftali Bennett, the haredi parties, Tzipi Livni's Hantnua party and Shaul Mofaz's Kadima. "Netanyahu believes that he must not miss this opportunity to jumpstart the political process, and to bring real and immediate change with the equal distribution of social burden," said a source who is familiar with the coalition talks.

Lapid, a former TV anchorman, has been publicly sparring with Netanyahu, even suggesting that he could become Israel's next leader within 18 months should Netanyahu fail to form a stable government.

Netanyahu, looking to clear the air just days after the president asked him to form the next government, held a two-hour session with Lapid to lay out his vision for a coalition of center, rightist and religious parties.

"The meeting ... was conducted in a very good atmosphere. It was agreed that another meeting between the two would be held soon," Yisrael-Beitenu and Yesh Atid said in a brief joint statement.

In a major political surprise, Yesh Atid captured 19 of parliament's 120 seats, compared with 31 for Yisrael Beitenu, which had 42 legislators in the previous Knesset.

Netanyahu needs at least 61 seats for a parliamentary majority and has 42 days to do it. He has several options, ranging from a narrow coalition with traditional right-wing and religious partners to broader alliances with centrist parties.

A government with centrist partners could help Netanyahu project a more moderate image as he prepares for a visit to Israel this spring by US President Obama, with whom he has had a testy relationship.

Two major international issues - frozen peace talks between Israel and the Palestinians and possible Israeli military action against Iran's nuclear program - were eclipsed during much of the election campaign by domestic social and economic concerns.

For Netanyahu, adding ultra-Orthodox parties - traditionally focused on their religious constituencies rather than on foreign policy - to a governing coalition could make it easier to leave out far-right factions and move forward in peacemaking.

"The voter wanted Netanyahu to be prime minister and Lapid to be the senior partner," Vice Premier Silvan Shalom of Likud-Beitenu told Army Radio before the two convened at the prime minister's Jerusalem residence.

"And the voter also wanted there to be a national unity government ... so we would like to see everyone inside," Shalom said. "We are making every effort vis-à-vis the ultra-Orthodox, too. They also understand that times have changed, that something must be done."

Most Israeli men and women are called up for military service for up to three years when they turn 18. However, exceptions are made for most Arab citizens of Israel, as well as ultra-Orthodox men and women.

About 60% of ultra-Orthodox men engage in full-time Jewish religious studies, keeping them out of the labor market and burdening the economy and state resources.