Bombing of rebel stronghold in Damascus

Op-ed: Assad regime, opposition lack the will or ability to put an end to 22-month civil war

They say the road to hell is paved with good intentions. It's a lesson that Ahmed Moaz al-Khatib, the leader of the Syrian National Coalition (SNC), likely learned when he sparked a firestorm within the Syrian opposition after declaring his willingness to enter into negotiations with theAssad regime on January 30. As part of his stated conditions, al-Khatib demanded the release of 160,000 political prisoners being held by the Assad regime and the renewal of expired passports for Syrian dissidents abroad.

Until al-Khatib's remarks, the SNC's official stance had been to reject all negotiations with the Assad regime unless the embattled dictator agrees to relinquish power. It comes as no surprise that other SNC officials and their backers in the region were quick to denounce al-Khatib's statements as unrepresentative of the coalition's policies. On February 5, the Coalition came together to issue an official rejection of al-Khatib's proposal, even after it had been softened to include demanding that Assad cede power as an outcome.

Their outrage did little to stop al-Khatib from reiterating his willingness to negotiate during a high-level security conference in Munich, where he also met with Russian and Iranian officials.

Al-Khatib's statements represented a sharp divergence from the longstanding policy of the Syrian opposition which opposes any form of negotiations and demands the ousting of the Assad regime. It's most likely that his shifting policy is part of a broader effort to portray a moderate stance toward the international community at a time when increasing radicalism has deterred much-needed funding from reaching rebel units on the ground in Syria. Such moves would also bolster the prestige of moderate elements within the SNC itself amidst growing influence by hard line Islamist elements.

That said, al-Khatib's statements may backfire in a big way, having caused outrage both within the SNC and between the Coalition and the Syrian rebel units. Members within the SNC who oppose the move include the Syrian Muslim Brotherhood, a highly influential faction whose years of persecution under the Assad regime have contributed to its hard-line stance. SNC members have since stated that by offering to hold negotiations, al-Khatib threatens to decrease morale on the ground by hinting at defeat. 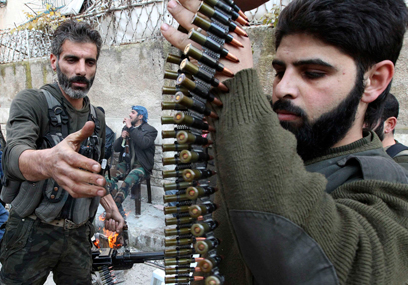 Many within the SNC have already begun to assert that al-Khatib was being lured to talks by an Assad regime strategy used during the Syrian occupation of Lebanon. During that time, the Assad regime incentivized certain elements of the March 14 coalition in an effort to divide Lebanon's anti-Syrian opposition, while ultimately failing to implement any real change.

Al-Khatib's continued promotion of dialogue will negatively affect the level of influence that the SNC retains among rebel units on the ground. The predecessor of the Syrian National Coalition, the Syrian National Council, was disbanded under international pressure due to its perceived failure to effectively influence and represent opposition fighting units inside Syria. Al-Khatib's potential acceptance of a Russian offer to hold talks in Moscow would further threaten disunity and mistrust between the SNC and the rebels. Syrian rebels have since targeted Russian and Iranian interests in Syria for their governments' staunch military and political support of the Assad regime.

Hypothetically, any future negotiation process would unlikely yield results, let alone materialize, in the near term. Under current conditions, the Assad regime is unlikely to yield to al-Khatib's request to release 160,000 political prisoners, as such a move would greatly strengthen the opposition by releasing potential combatants, many of whom were radicalized during torture and inhumane conditions during captivity.

Furthermore, the SNC retains relatively little influence over key rebel units, primarily those with Islamist leanings. Units with jihadist ties such as Jabhat al-Nusra have emerged the opposition's most capable fighting force, often spearheading campaigns to capture key military sites in outlying areas while staging suicide attacks against well defended government installations in major cities. These groups have long stated their refusal to align with moderate rebel units, while opposing the leadership of the SNC. As such, these extremists would likely work to collapse any potential agreement between the Assad regime and the SNC by increasing their attacks in an effort to provoke government reprisals and return the revolution to its endless cycle of violence.

Simply put, both the Syrian government and the opposition lack the will, or ability to put an end to their protracted 22-month conflict, which has already claimed over 60,000 lives. It's a reality that Ahmed Moaz al-Khatib should come to terms with quickly, or he may soon find himself excommunicated from the Syrian revolution.

The author is the MENA section intelligence manager at Max Security Solutions, a geo-political risk consulting firm based in Tel Aviv. You can follow him on Twitter @Dannynis