Vandals sprayed a dozen Muslim graves in a Jerusalem cemetery with graffiti in a politically motivated act, police said.

Spokesman Micky Rosenfeld said the phrase "price tag" was sprayed in Hebrew over the graves early on Thursday. A Star of David was also painted on the graves. 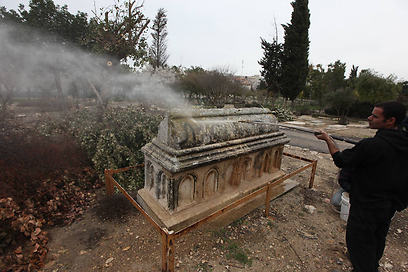 The term "price tag" is used by a tiny fringe of extremists to protest Israeli policy they view as favoring Palestinians. Israeli military bases, churches and mosques have also been targeted.

The centuries-old cemetery in central Jerusalem is near the site of a planned museum of tolerance. The project by the Simon Wiesenthal Center, a US-based Jewish group, has drawn fire from Palestinians who say it desecrates graves.

The Wiesenthal Center has said the construction is in an area that has been a parking lot for 50 years.