'We don't want to see these tunnels used for illegal ways of smuggling either people or weapons that can really harm Egyptian security.' National security adviser to Morsi says, adding that president will respect peace treaty with Israel

Egypt will not tolerate a two-way flow of smuggled arms with the Gaza Strip that is destabilizing its Sinai peninsula, a senior aide to its Islamist president said, explaining why Egyptian forces flooded sub-border tunnels last week.

The network of tunnels has been a lifeline for some 1.7 million Palestinians in Gaza, bringing in an estimated 30% of all goods that reach the enclave and circumventing a blockade imposed by Israel for more than seven years.

But Essam Haddad, national security adviser to President Mohamed Morsi told Reuters in an interview: "We don't want to see these tunnels used for illegal ways of smuggling either people or weapons that can really harm Egyptian security." He said that under a deal brokered by Cairo to end fighting in November between Israel and the Hamas movement that rules the Gaza Strip, the Israeli stranglehold on the coastal territory had been considerably relaxed. Egypt has eased border controls to allow in construction materials, notably from Qatar.

"Now we can say that the borders are open to a good extent - it could still be improved - and the needs of the Gazan people are allowed in. Building materials are allowed in for the first time," Haddad said. "And on the other side, we would not like to see arms smuggled through these tunnels either in or out, because we are now seeing in Sinai and we have captured actually across Egypt heavy arms that could be used in a very dangerous way." Sixteen Egyptian border guards were killed last August in a terrorist attack in Sinai near the Gaza fence that shocked Egyptians and highlighted lawlessness in the desert region adjoining Israel and the Gaza Strip. Cairo said some of those gunmen had crossed into Egypt via the Gaza tunnels - an accusation denied by the Palestinians. Dozens of tunnels have been destroyed since that incident. 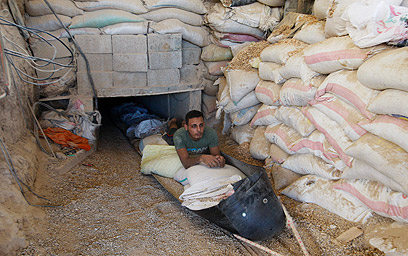 Last Friday, Egypt said it had seized two tons of explosives hidden in a truck carrying a shipment of fruit and vegetables bound for Sinai. In January, Egypt seized six anti-aircraft and anti-tank rockets in the peninsula that smugglers may have intended to send to Gaza.

Despite the flooding of the tunnels, which sparked bitter complaints from Palestinians, Haddad said relations with Hamas, ideologically close to the Muslim Brotherhood movement now ruling in Cairo, were good.

Egypt has been trying, so far without success, to coax Hamas and the Fatah nationalist movement that runs the Palestinian Authority which controls the West Bank to agree on a national unity government and elections.

But Haddad made clear that President Mohamed Morsi would scrupulously respect Egypt's 1979 peace treaty with Israel, and that daily cooperation with the Jewish state continued as normal, even though there were no contacts at a presidential level. An Israeli security delegation visited Cairo for talks last week and two Israeli warships passed through the Suez Canal, one flying the Star of David flag for the first time in years. Asked whether he saw a threat to Egyptian security from al-Qaeda Islamist terrorists, Haddad said a structured al-Qaeda network with its connections and operations did not exist in Egypt. But its extremist ideology knew no borders. "Everybody has noticed that since the collapse of (former Libyan leader Muammar) Gaddafi's army, the amount of weapons smuggling across the whole region has really increased dramatically," he said. "This is something that is really alarming because you don't know who will be getting these arms. And when you see there are anti-aircraft missiles inside Egypt and anti-tank weapons inside Egypt ... you will question who is doing this and why. "That is why we want to strengthen our western border," Haddad said, adding that this was the government's top security priority now.

Egyptian security authorities are still investigating whether a terror cell arrested in Cairo this month had links to an al-Qaeda network.