Science Minister Yaakov Peri set to head ministerial committee on equal share of burden, will need to submit bill before Knesset within 49 days, in accordance with coalition agreements

It was announced Wednesday that Science Minister Yaakov Peri will head a ministerial committee that will legislate issues pertaining to "equal share of the burden," namely the integration of haredim in the job market and the in the IDF .

The committee – composed of Defense Minister Moshe Ya'alon, Housing Minister Uri Ariel, Environmental Protection Minister Amir Peretz and another minister from Yisrael Beiteinu – is to submit a bill to the Knesset within the next 49 days, in accordance with the coalition agreements.

Once the bill is approved by the Knesset the committee will act as an observer to ensure the execution and implementation of the bill throughout the tenure of the 33rd government. The committee will also be authorized to propose amendments to the bill if and when needed. 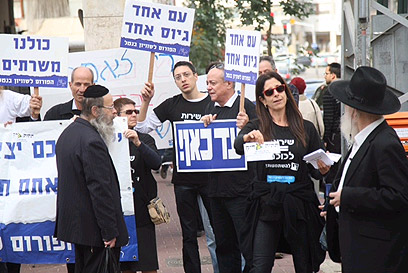 The cabinet is set to confirm the appointments next week.

On Tuesday Chairman of the Habayit Hayehudi party Naftali Bennett presented his plan for equal share of the burden.

The 1,800 will be chosen every year out of the 7,000 haredim designated for military service every year.

According to Bennett "The haredim will be responsible for choosing occupations where they can earn money. Don't become a lawyer or an accountant, choose occupations that need people."

Bennett's bottom line is that only 1,800 will continue to study Torah and receive financial support from the State. "The rest – will first go to the military or national service – and then choose what they want to do with their lives. If they want to study, they can study."

He noted that the coalition agreements with Yair Lapid and the Yesh Atid party were a "breakthrough." According to Bennett, "For the first time the State of Israel explicitly recognizes the importance of Torah studies as a value. This is a breakthrough that was never in the book of laws."